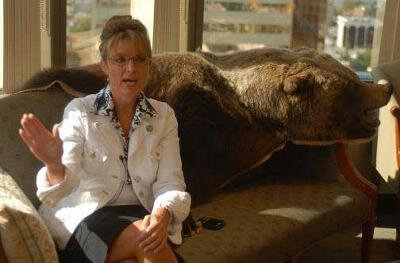 Today I was planning on highlighting a news story on former Patriot Teddy Bruschi slamming current Patriot Chad Ochochinco about going to Twitter and proclaiming he was in awe over Tom Brady on Monday night.

I also considered talking about Boise State getting three years probation from the NCAA for some lame rules violations.

But I couldn’t pass this up. It was just way too funny and it might cause Fox News to break out in hives.

The National Enquirer obtained a good nugget of information from the new book “Rogue: Searching for the Real Sarah Palin” by Joe McGuinnis.

“In the book, which will be published on September 20th, McGinniss claims Sarah had a steamy interracial hookup with basketball stud GLEN RICE less than a year before she eloped with her husband Todd.

Sarah hooked up with the NBA great, then a 6-foot-8 junior at the University of Michigan when he was playing in a college basketball tournament in Alaska in 1987, the book says. At the time, Sarah, just out of college, was working as a sports reporter for the Anchorage TV station KTUU.

A publishing source told The ENQUIRER that McGinniss claims Sarah had a “fetish” for black men at the time and he quotes a friend as saying Sarah had “hauled (Rice’s) ass down.”

A source unrelated to the book told The ENQUIRER, Todd was very much in the picture at the time and the couple married just nine months later.

In the book, McGinniss quotes Rice as confirming the one-night stand.”

Now, I'm not normally one to enjoy the airing of someone's dirty laundry. What's private is private and should be kept that way, but with the scummy state of politics these days I very much enjoy this. Politicians are shady characters and when a shit pie is baked for them they should have to eat the whole thing.

If the two crossed paths then I have no problem believing this. Athletes are notorious lady-killers around college campuses across the nation. The fact it was Glen Rice makes it that much more plausible.

If I were a big-time college athlete, and especially one with an NBA career ahead of me, I’d be out there gun slinging like the Wild West. Chasing down girls left and right. Just about any guy I know would do the same, don’t deny it gentlemen. As for Sarah Palin? I’d hit it.