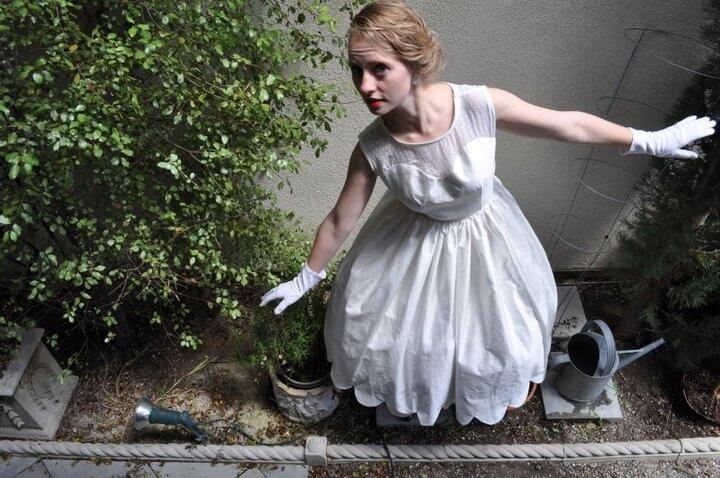 From 1890 to 1920, American society blossomed into a culture focused on its people — how they lived, what they bought and more importantly, what they wore.

Three student designers at Saddleback College in Mission Viejo, Calif., drew inspiration from the period to create gowns, corsets and even tutus that took viewers back in time at their recent fashion show, “Viva por la Moda.”

Joany Hernandez focused on the beginning of the era, circa 1898, designing a French-influenced, couture line in pink and black.

“I love vintage, so I was very inspired to incorporate vintage looks with a modern twist,” Hernandez said. “I fell in love with a remnant of chenille fabric and designed my whole line around [it].”

Hernandez won first place for her corset design, as well as three second-place awards in the ready-to-wear, evening wear and fantasy categories.

Despite her success, Hernandez admits to an occasional “lack of creativity.”

“I usually need to be inspired by something I’ve seen, whether it be other garments, a form of architecture (old and modern), something in the environment like the sand, a cloud or a seashell,” Hernandez said. “It’s hard for me to just come up with a creation thought up in my mind.”

Yet Hernandez has come a long way; she said she’d never considered “turning [her] sewing ability into a business” before enrolling at Saddleback.

“The instructors want to see their students grow and become successful, and they give us the opportunities to do just that,” Hernandez said.

“I tend to go through year-long obsessions with certain bygone eras,” Mauter said. “I am enthralled by the 1900s.”

Mauter has a hectic schedule, working on creating tutus for a ballet company, designing a cocktail dress for her upcoming rehearsal dinner and costuming Flight of Man, a short film in the Tim Burton style, set at the turn of the century.

“For Flight of Man, my favorite aspect was the character of a magical woman,” Mauter said. “She embodied inspiration, so I wanted to make her character alive while everyone else appeared dull…”

This sense of relationship between clothing and personality helped win Mauter the Instructor Favorite award at the Saddleback show.

Mauter admits that she has trouble with organization and gives credit to her fiancé and roommates for helping her to grow in that area.

“I think determination and organization are both important to completing a large scale project, but I know that having good people and friends that work alongside you and support you is the key to a successful project in any aspect of life,” Mauter said.

Mauter plans to move to Los Angeles and enter the film costume world. Check out her website: www.Lemauter.com or her blog: www.lemauter.blogspot.com for more information.

Marie Wencel’s collection focused on the end of the Gilded Age, when consumerism was still a significant part of society but gender roles had changed.

“My inspiration was this yellow and black chiffon fabric I found on clearance and 1920s androgyny,” Wencel said. “Most of my designs are very tailored and fitted, so I wanted to challenge myself with shapes I don’t usually use.”

Wencel’s efforts earned her Best in Show at “Viva por la Moda”, among other awards, yet her perfectionism occasionally prevents her from enjoying these triumphs.

“While I am sewing something, I am thinking of it in pieces and what steps I need to follow to put it together. Even after it’s finished, I am only looking at its flaws and what I could do better next time,” she said. “It’s not until it is on the runway that I can see it as a whole and see it move and function. I have to remind myself, ‘Wow, I made that.’”

Ultimately, Wencel recognizes the importance of her work as an expression of life and emotion.

“My favorite part of designing is that after I finish a garment, it becomes a living piece of art. I wear it or someone else wears it, and it gets to experience life along with its owner.”

Wencel plans to work as an assistant designer or patternmaker after graduation but hopes to open her own boutique someday.