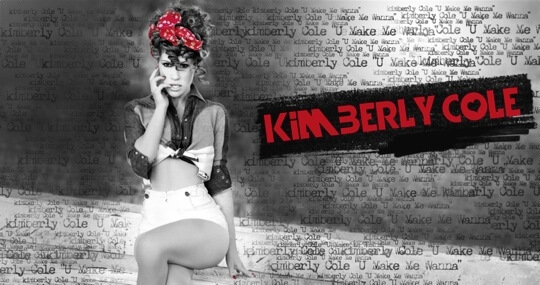 Roller Skating Rock Star Kimberly Cole has 1.5 million Twitter followers-Are you one of them?

Maria MinskerMay 15, 2012
Home » Latest Posts » Roller Skating Rock Star Kimberly Cole has 1.5 million Twitter followers-Are you one of them?
FacebookTweet
Orange County, California native Kimberly Cole has been singing, dancing and playing piano since she was just four, but it wasn’t until she was a teenager that her skills came together in an unexpected way. At a young age, Cole became a champion competitive artistic roller skater and performed a variety of exciting hip-hop and breakdance fusion routines in front of arenas full of audiences–an experience that would prepare her for rockstar future.
Cole says that artistic roller skating was not only a ton of fun, but also great preparation for her music career. “You perform individually,” Cole explains, “so it really teaches you to depend on yourself and no one else. It also takes a lot of training, so it builds determination and encourages you to be the best at what you do.”
When Cole decided to hang up her skates, her electrically charismatic personality helped her land several hosting gigs on MTV and the X Music Network, along with a celebrity guest judge spot of VH1’s Saddle Ranch.

“I loved hosting because I really enjoy talking to people and listening to them. I talked to a lot of new artists, and I really related to them because I knew exactly what they were going through. If I weren’t in the music industry, I’d be a therapist,” Cole jokes.
When she broke out onto the music scene as a performer, Cole began as a headliner and opened for artists like Katy Perry, LMFAO, Cobra Starship, Lupe Fiasco, and Shiny Toy Guns. When she opened for Katy Perry, Cole recalls, she actually opened on roller skates.
In 2010, Cole released her debut album, Bad Girls Club and has since been named one of the most buzzworthy new artists by MTV.
In her own words, Cole describes her music as edgy swag-dance mixed with a little pop. “I didn’t want my music to sound too pop-y. I’m always going for a raw, emotional sound. I want to create music that can make you get up and dance, but also feel something. I want it to move you physically and emotionally,” she says.
The inspiration for her music, Cole explains, comes from real life situations. Her first single “Smack You,” is an upbeat and highly energetic song that was written with some very real emotion. “Just the night before I was supposed to meet with writers to work on a song, I ran into this girl and she was just awful. She made me cry and I wanted to smack her. My music definitely comes from a real place,” she says.
Cole’s music is also very much about girl power, and gaining confidence. “I dedicate ‘Smack You’ to anyone who has ever been a victim of bullying,” Cole says, “because it’s about the one thing you wish you could do to a bully, but can’t.”
Her first single, as well as the rest of her debut album, has been met with praise, and several of her songs have landed on Billboard Dance Chart’s Top 20. Cole has also gained an impressive following on Twitter–over 1.5 million followers.
“Twitter is a job,” Cole says, “but I’m so blessed that I can share my life with fans. I feel like I know them all!”
Cole’s newest single, “U Make Me Wanna” has just been released, and the audition for the song’s music video has become one of YouTube latest sensations (over 3 million views!) thanks to a special appearance by a very special character. Check it out below!

Previous Post:How Honest Are College Students?
Next Post:10 Ways to Spice Up Your Sex Life