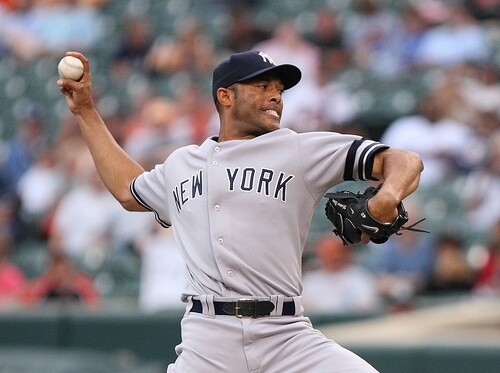 What a week, no, NIGHT in baseball. Not one but two pitching greats reached remarkable feats on Tuesday, September 13.

It began with Boston Red Sox starter Tim Wakefield, after eight failed attempts, finally was able to seal win number 200 in an 18-6 defeat over the Blue Jays. At 45 years old and a free agent after this year, fans were beginning to wonder if Wakefield would be able to complete such an accomplishment in a Red Sox uniform. However, since joining the Sox since 1994, Wakefield was more than deserving of the fan appreciation that roared from the stands. He is the seventh knuckleball pitcher in history to reach the mark.

The night became even more incredible when the greatest closer of all time, Mariano Rivera of the New York Yankees, reached 600 saves. Rivera, a future Hall-of-Famer, earned the save in a 3-2 win over the Seattle Mariners. Only he and Trevor Hoffman (Currently with 601 saves) have reached the feat and. Rivera made it clear that although 600 is great, 601 is his personal goal. A goal he will surely achieve soon.

Wakefield and Rivera are some of the greatest in the game today. Not once have either of their names been uttered in a steroids scandal or had a personal indignity thrown throughout the media. They really are all around “nice guys” who come in and do their job day in and day out.

Such records are phenomenal accomplishments and for both to be achieved on the same night is just another reminder of why the game is so great. I particularly revel in the fact that both men are on opposite sides of the greatest rivalry in sports today. It seems almost every year the two duel down to the wire for playoff spots. Although the Sox sit a distant 4.5 games back from the Yanks in the AL East, I hope they can hang onto the wildcard spot. Seeing these two teams match up in the playoffs never disappoints.

Previous Post:C+ For Jurgen Klinsmann
Next Post:All Time High for ‘All Time Low’