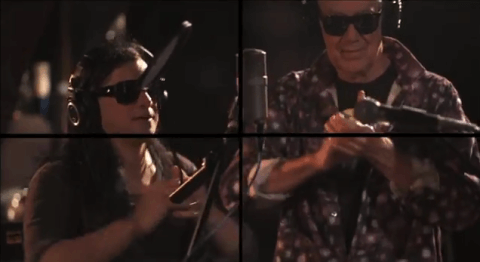 I first met Sonny Moore about seven years ago, when I was 15 years old and had waited around after a show to see if I could get a photo. This was also back when he used to be the vocals for From First to Last and when he was still known as Sonny Moore. I remember thinking at that time, how amazing it was that someone who was only a year and a few months older than I am, could have already been doing so much. Little did I know, however, what was to come.

Now, the DJ/producer professionally known as Skrillex has grown to incredible heights in the music world, with an international popularity in dubstep and electronic dance, and a label, OWSLA, with artists like Porter Robinson and Zedd (Anton Zaslavski) attached. But that’s not where this 23-year old stops.

Skrillex is marking his place in history and working with absolute legends in doing so.

RE:GENERATION is a documentary film co-produced by the Grammys and directed by Amir Bar Lev that will premiere early in 2012. The project recruited five popular DJs/ Producers to work with artists from five separate genres to record new music. So who worked with Skrillex? Ray Manzarek, John Densmore and Robby Krieger of The Doors. Yes, that’s correct.

Catch your breath for a moment…

Not only did the remaining Doors members work to create a track with Skrillex, but Manzarek told Rolling Stone, "I like to say this is the first new Doors track of the 21st century."

So who else is working on this project? DJ Premier is producing a classical track with Nas and the Berklee School of Music Orchestra; Pretty Lights is doing a country song with Leann Rimes and Ralph Stanley; The Crystal Method recorded an R&B track with Martha Reeves; and Mark Ronson, teamed up with Erykah Badu, members of the Dap Kings and Trombone Shorty for a jazz cut in New Orleans, according to Rolling Stone.

While some may question the pairings, a project this ambitious is definitely something to get excited about.

—Can’t wait? Here’s a preview of the trailer:

Previous Post:College Is My Boyfriend
Next Post:Pick-Up Tips From…The Activist