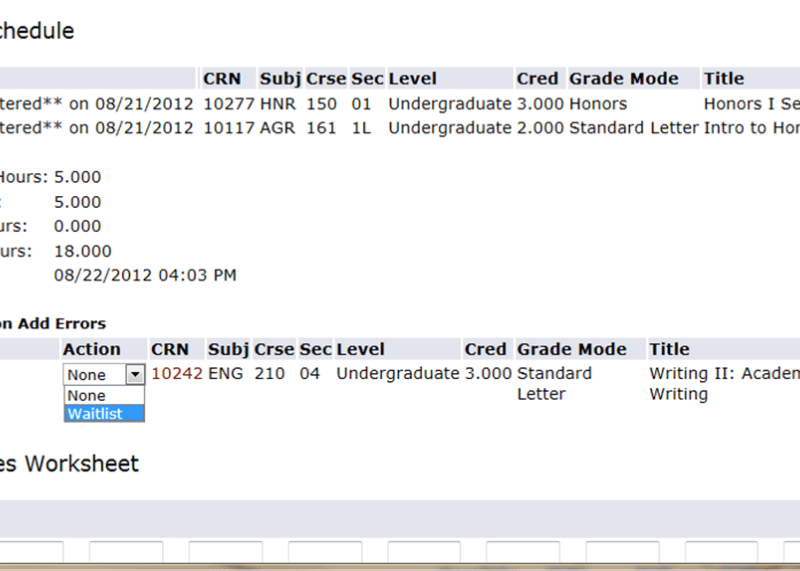 Thirty-one minutes later, it looks like you’re taking theater appreciation this semester instead.

Admit it – we’ve all been there at least once. Registering for classes can either work out perfectly or be the worst experience of your semester. Everyone has to do it, but for some reason we all have to do it at the exact same time and mass chaos inevitably ensues.

Jim Alrutz, a sophomore at Northwestern University, changed his major to music cognition in the School of Music, which is under a different sect in his university. However, when he tried to register for his now required music classes, the university’s system did not recognize him as a music student and refused to let him register for music classes. Alrutz had to meet with his dean to manually select his courses.

Alrutz also took a minor in sound design, but to take any courses in that subject, he had to get permission from each professor individually. Sound design does not have its own department, he said, so registration is very complicated.

It was several weeks after registration ended that Altruz finalized his class schedule. He said that while his situation worked out, many others aren’t so lucky – there are students who can’t get into classes they really should take early on in their college career to be successful.

Grant Weekley, a computer engineering sophomore at Vanderbilt University, is trying to do exactly what Altruz reccommends. He spent this semester preparing to take three mandatory prerequisites at once next semester. Then, come registration  he found himself waitlisted for two of them and locked out of the third.

“I don’t get to choose what I take yet,” he said. Because of his limited choices he didn’t have any backups, but fortunately the department ultimately decided to offer a wider range of class times and Weekley was able to get into all three of his requirements.

Weekley tries to be proactive about the registration season because not taking a certain course at the designated time can set him back. He said students should look at class registration holistically and decide which courses you must take right now.

Trey Levy, a senior at Oberlin College, is content with taking the next best alternative. Of course, he usually never has to make that decision.

Levy hasn’t had any major issues trying to register for his classes. Oberlin College is a liberal arts college and music conservatory with about 3,000 students. With such a small student body, Levy said it’s easy to pick classes. He can talk to professors about it with no trouble. Overall, he said no administrator or professor will shut the door in your face.

When you don’t have a registration issue, school is great. When you do, you into the abyss of insanity and threaten to drop out. But whether you always seem to have to fix a problem or you just glide right on through, remember – there’s a light at the end of the tunnel. Graduation. And it’s totally worth it.