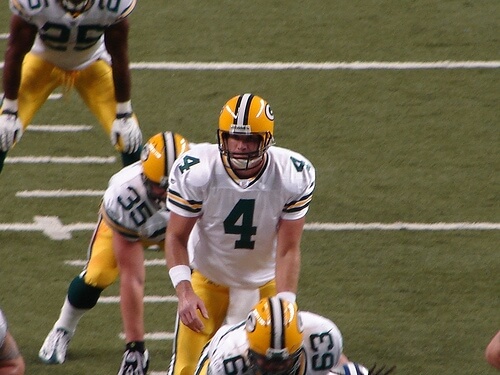 Reasons Brett Favre Could Play On Your Favorite NFL Team

There have been suggestions the Miami Dolphins may have interest in America’s Favorite Retiree, Brett Favre, because their quarterback, Chad Henne, is being booed by fans at training camp (which is pretty sad).

When asked, Miami head coach Tony Sparano didn’t dismiss the possibility. And why should he? Everyone can use a little Favre.

Here are reasons why Favre should sign with 29 of the NFL’s 32 franchises. (For the sake of the argument, let’s assume Favre will not be signing with Green Bay, Minnesota or the New York Jets for obvious reasons.)

WASHINGTON:Not even John Beck has confidence in John Beck. Dan Snyder’s checkbook is part of the equation.

DALLAS:Tony Romo’s star is dimming. Jerry Jones’ checkbook is part of the equation.

N.Y. GIANTS:Actually, I’m a Giants fan. And I don’t want the sideshow. So forget the Meadowlands, Ol’ No. 4.

PHILADELPHIA:Everyone else is going to the Eagles. Why the hell not.

DETROIT:Matthew Stafford is injury-prone. Two shots at the Packers and Vikings each season.

CHICAGO:Jay Cutler isn’t exactly a profile in courage. Two shots at the Packers and Vikings each season.

NEW ORLEANS:As close to Mississippi as Favre is going to get in a professional franchise.

TAMPA BAY:It’s a city with ‘Bay’ in its name.

SAN FRANCISCO:It would be fascinating to see a Hall of Fame quarterback (Favre) coached by a contemporary (49ers coach Jim Harbaugh) he played against.

ST. LOUIS:Easy to make the playoffs (6-10 might win the NFC West). Sam Bradford may be due for a sophomore slump.

SEATTLE:Sidney Rice is now a Seahawk. As of now, he’s scheduled to receive passes from Charlie Whitehurst.

NEW ENGLAND:Solid chance to pick up an easy ring while holding a clipboard. Belichick might let him dropkick an extra point in Week 17.

BUFFALO:The league’s greatest folk hero can try and end its greatest tale of agony. Favre’s got to be better than a dude from Harvard.

MIAMI:Henne’s getting booed during practice, for goodness sake.

BALTIMORE:Ray Lewis and Brett Favre in the same locker room would be hilarious.

PITTSBURGH:Brett and Big Ben can share stories of embarrassing conversations with Roger Goodell.

CINCINNATI:West coast offense team in need of a surge of energy.

TENNESSEE:Handing the ball off to Chris Johnson is the next best thing if you can’t hand off to Adrian Peterson.

HOUSTON:There are less exciting ways in which Gary Kubiak can inevitably get fired after this season.

JACKSONVILLE:Every retiree wants to end up in Florida.

OAKLAND:Favre is old and costs a lot of money – two key requirements to be a Raider. Al Davis is batshit crazy.

DENVER:Tim Tebow and Brett Favre on the same team would cause Jon Gruden to spontaneously combust on Monday Night Football.