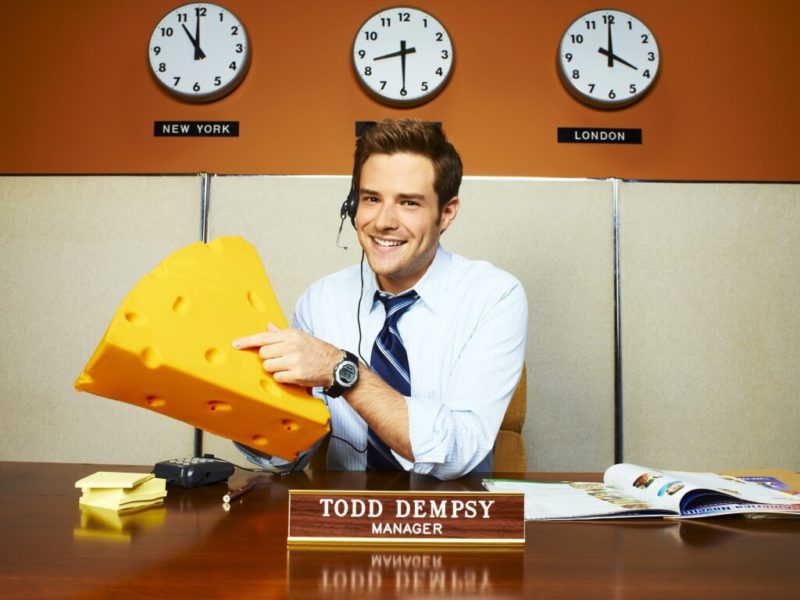 In his own words, Ben Rappaport was destined to be an actor. And at age 24, the Juilliard graduate’s fast-forward success toward the leading role on a cable television sitcom indicates just that: just two years after graduation, he now plays Todd Dempsey, a naïve American salesman placed in charge of an Indian call center on NBC’s Outsourced.

“I was always kind of a weird kid,” he said, of his childhood years when the figurative, practice-your-stage-act bedroom mirror was perhaps more of a friend to him than his classmates. “I was always living in my imagination. I was pretending to be other people, pretending to be Indiana Jones; I had built time machines from Back to the Future in my basement out of cardboard boxes.”

Growing up in Texas, Rappaport was driven toward the arts. He created pseudo-movie sets in his house and was a member of the student band. But his "Ah-ha" moment, as he described it, came after seeing an impressive production of Romeo and Juliet at his high school.

It was then that Rappaport began pursuing his dream — performing on-screen — which would come sooner than he predicted. After exploring Klein High School's stage and later slaving over scripts, he was admitted into one of the world's most sought-after performing arts schools where he studied acting. The cards played out in a way that epitomizes the aspirations of today's college student: just two years after completing his undergrad at the notoriously competitive (with an 8 percent acceptance rate) Juilliard School, he had a job. A damn prestigious career, actually; Rappaport catapulted toward his current television role on one of America's major networks.

But his journey was hardly the smooth ride the public believe it to be, he says. “What people don’t tell you and what you kind of have to learn the hard way is that when you get out of school, there’s a lot of struggle there. It was really that difficult, working-actor-in-New-York time, counting the days, working several jobs to make a buck,” he said, adding that he often doubted himself. He silenced the discouraging voice within by focusing on his passion, and with time, Rappaport's craving for the camera prevailed.

“I think the most important thing is to really have a specific and solid dream that you think about every night before you go to bed,” he said.

Right in line with that philosophy, Rappaport’s success came largely as the result of a quality he urges college students to embody: focus. Opportunities began to stare him in the face and without hesitation, without regard for outcome, and without looking back – he took them. So landed him the role of Todd Dempsey.

“I remember getting the Outsourced script and … I just laughed out loud. I just thought it was so unique and so different,” he said of his first introduction to the proposed sitcom. After being impressed by what he called a potential “milestone” in television, Rappaport immediately went through the audition process, which eventually (and successfully) brought him to abandon his east coast lifestyle to live and work in Los Angeles.

“There were no hesitations in taking it on. I was truly excited to hopefully be a part of something that could really be kind of legendary and open people’s minds up to a new place and new characters that they wouldn’t have opened up to before,” he said, adding that Todd’s stories in Outsourced in many ways mimics his own character, a similarity he seldom found in his acts at Juilliard.

Now, Rappaport lives a bicoastal life between L.A. and the Big Apple. While not on set, he explores the famous city, takes trips to New York to visit his theater-bound girlfriend, and fancies about his dream role as Hamlet. While on it, he bonds with the actors alongside whom he works over discussion about their Indian customs, language and culture.

“Being engrossed in [the culture], it’s hard not to learn anything,” he said. “I’d love to take a trip to India someday.”

While Rappaport admitted he didn’t expect to be in the position he’s in today – he said he’s thrilled with where life has taken him, attributing his fast-track success much to the lessons he’s learned as a young adult.

“One thing that’s really important is to not compare yourself to others. You graduate and everybody’s at the same exact level, and then all of the sudden your buddy gets this job with a six-figure salary, while you can’t get an audition, or you can’t get an interview, or you think so-and-so’s job is better than [yours],” he said. “I think that’s the key: just stay on your own track.”