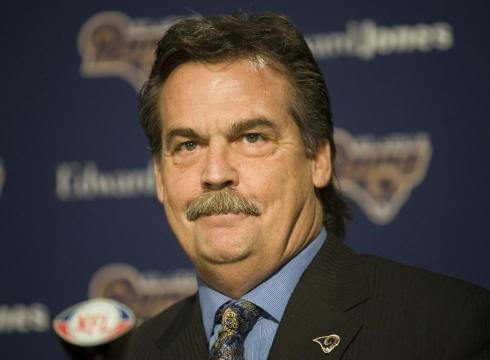 Long gone are the days of “The Greatest Show on Turf.” In fact, since 2004, the St. Louis Rams have been caught in a downward spiral.

There have been five different head coaches, none of whom could muster up a record greater than .500. Overall, in the past seven seasons, the Rams own a 29-83 record, the worst in the National Football League.

Of course a change needed to be made. The St. Louis thought they were making a big splash by reeling in Jeff Fisher to coach the team. But what the Rams actually did was hire nothing more than select a consistently average coach to run this team.

Jeff Fisher’s name has an aura around football. But his head coaching record with the Houston Oilers/Tennessee Titans franchise: 142-120. That’s six losing seasons, six winning seasons and five 8-8 finishes. He’s won his division three times in 16 full seasons. And in the playoffs, his teams are 5-6, including two losses in his last two appearances.

If you’re the Rams, you’re sick of futility. But from this point on, get used to mediocrity. Essentially, this hire is more of a headline than a football move. A well-known head coach opted to go to St. Louis over South Beach. Sure, it might reinvigorate the fan base in the short term, but it’s back to square one when the team is averaging seven wins a year.

Fisher has never even won a Super Bowl. Sure, he made it to the big game during the 1999 season, but he lost (ironically to the Rams). That string of success stemmed from the two Hall of Famers, Steve McNair and Eddie George, on his squad. But as the names of the back of the jerseys changed, Fisher’s struggles became real.

A 13-3 finish matched Fisher’s best season, but it was quickly forgotten with an early departure in the playoffs. A year later came the beginnings of the Kerry Collins-Vince Young rift, one in which Fisher opted to go forth with the aging Collins at quarterback while Young, the team’s No. 1 draft pick in 2006, would have to “earn his job back” after an injury.

But after a 0-6 in 2009, Fisher received pressure from team owner Bud Adams to play Young, and did so begrudgingly. Young ended up a Pro Bowler that year. But the well-documented tension between Young and Fisher culminated after the 2010 season, when Adams exiled both of them. In his last four years, Fisher went 37-37.

In St. Louis, owner Stan Kroenke assured Fisher he’d have carte blanche on personnel decisions, so another Vince Young-like situation wouldn’t transpire. He’s already hired former Saints defensive coordinator Greg Williams to pilot the defense. You’ll remember Williams from a week ago, when Alex Smith torched his defense in the closing seconds. He’s also deciding between Brian Schottenheimer and Hue Jackson to run the offense. Schottenheimer, of course, is charged with Mark Sanchez’s regression, and Jackson is the sixth head coach to be fired in Oakland in the past decade. Oh, and his team recorded the most penalties in league history…just saying.

Will the Rams improve under Fisher in 2012? Perhaps; though it’s not too difficult to exceed the two-win plateau. But I can guarantee this: it won’t be a story like their division rivals, the 49ers’, who hired Jim Harbaugh, an up-and-coming coach. In contrast, we know Fisher’s M.O., and we’re not impressed.

Previous Post:BYU Student Fights Cussing On TV
Next Post:Are You There College?