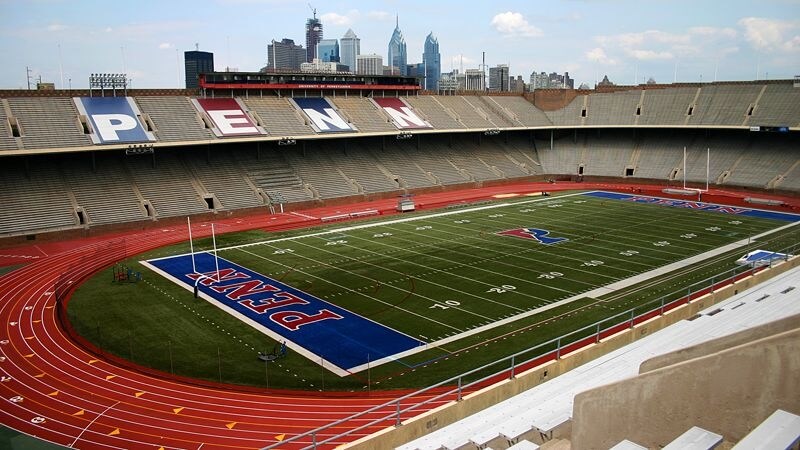 He threw for over 4,200 yards and 38 touchdowns over two years as the starting quarterback for Moorestown High School in New Jersey. He starred for Moorestown as a starting pitcher and infielder for their baseball team. According to The Daily Pennsylvanian, he expressed interest in Harvard, Princeton and Yale before committing to Penn in November 2011. He said he sees himself wearing four Ivy League championship rings on NFL draft night – just one of the many aspirations Andrew Lisa has going into his freshman season at Penn. Lisa’s father, David, was also a Penn QB – something he says motivates him for some family bragging rights. I, personally, was a teammate of Lisa’s at Moorestown for three years, so it was great to hear a different side of the teammate I knew in high school.

College Magazine: Why did you choose to play football at Penn rather than at the other schools you were looking at?

Andrew Lisa: I chose to play football at Penn for numerous reasons. Penn has a great mix between football, academics and social life. I love the coaches and players here and also feel that I fit right at home with the rest of my teammates. The university offers me extraordinary connections as well as a great chance to make it to the [National Football] League. I had an offer from Harvard, Yale, Princeton, Maryland, New Hampshire, Bryant, Kent State, and about 25 other Division 3 schools.

CM: Why did you choose to play football in college rather than baseball?

AL: I chose to play football because of my love for the game. I love football and love playing the quarterback position and I couldn’t take the feeling of never playing football again after high school. Also, the wear and tear that football puts on your body even as a quarterback is something that you can not handle as an older man but baseball I can always fall back on.

CM: What's the strongest part of your game? Weakest?

AL: The strongest aspect of my game would have to be the leadership I distribute, my arm strength and the mental aspect of the game. I believe that if you have a smart quarterback that can understand reading defenses and continually make a strong, accurate throw on time, and then it will get you far. The weakest part of my game would have to be my speed. I’m not the fastest man on the planet however I am working hard everyday to improve that.

CM: As a quarterback, what other position is the most important to you on the football field?

AL: Well, obviously the linemen are a huge part of importance on the field. Everything starts with them. If they get a good push off the ball, create a hole or give the QB time, then a successful play is bound to happen. People do not give the line enough credit, but I believe that having a great line core will give you the best chance for success. Also, anytime there are a couple receivers who have a relationship with the QB as in getting timing down for routes then that always converts to completions.

CM: How do you use your experience and talents in other sports than football?

AL: I try to use football to improve my baseball ability. Being a leader in football, it carries over to playing shortstop. Taking charge and always staying calm no matter what the situation is I feel is a strong asset to have to calm your teammates and allow them to believe in you.

CM: What are you studying at Penn? What were your strongest/favorite subjects in high school?

AL: I’m studying business at Penn and I am enrolled in Wharton [Business School]. I’m not sure exactly which branch I’m going to focus on but either finance or marketing is what I am thinking. Math would have to be my favorite subject. I have always been good with numbers and being able to understand conceptually the aspects of a problem.

CM: How important are the relationships between you and your teammates?

AL: Having a great relationship with my players is what eventually leads to success on the field. Being able to bond and have a true brotherhood is what football is all about. Knowing that my teammates have my back as well as I have theirs shows true love for each other.

CM: Which NFL player do you personally compare yourself to mostly?

AL: I like to compare myself to Matt Ryan. He is my favorite QB and I am also the same number as him (number 2). He displays all the attributes that I feel make a great QB. He is confident in himself and [in his] teammates, he has a strong arm and delivery and knows the mental side of the game extremely well.

CM: Who's your biggest influence both in life and in sports?

AL: My father David Lisa. He played football at Penn as well. He has been one of the most influential people in my life. Ever since I was little, he has been teaching me the game. He still does that now with film studies, and just trying to be a real student of the game and learning as much as I can so that I will be able to carry all those aspects onto the field and be very prepared. Also, he played safety for Penn and I have always wanted to live in his footsteps—but also outshine him for some bragging rights.