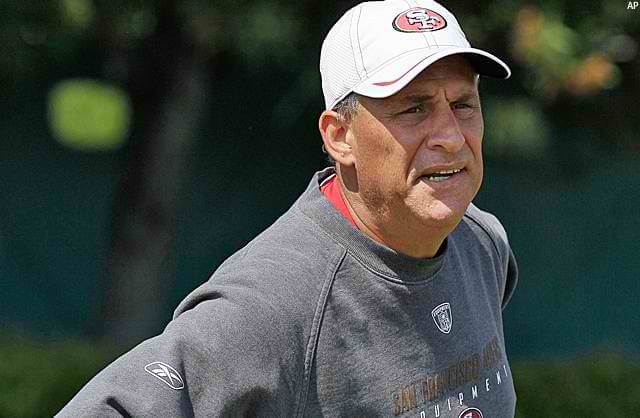 Q&A With 49ers’ Fangio: The Man Behind The D

DS: When did you make your decision to officially pursue coaching as your long-term career?

VF: “I always wanted to be a coach, knew that from early on. Really, all I ever wanted to be was a high school head coach. But once I got into coaching, I caught the bug and advanced through it. I went to the USFL in the early- to mid-80s, which is where I got my lucky break and hooked up with Jim Mora. The rest was history.”

DS: Last year, your 49ers defense ranked second in points allowed and fourth in yards allowed. Right now, we are in an era that puts a spotlight on the quarterback position and mostly hails the offense for winning games. So how important was your defense to the success of your team and getting you into the playoffs?

VF: “Usually, what happens in the NFL, if you have a good season like we did and you’re winning 13 games and you’re getting to the NFC Championship, you usually have one side of the ball that is playing really good and the other side is being competitive. The defensive side of the ball was definitely our real good side this year with the 49ers.

“Overall, we had a good season — led the league in points allowed for the bulk of the season then lost it [during] the last couple weeks of the season. We played the Giants better than [anybody] did in the playoffs, but overall very pleased with the way our defense played.”

DS: One thing I noticed in San Francisco is it seemed like you changed the identity of the defense. Your guys became more aggressive and it looked like they were a lot more fundamentally sound. How important was it to have your players buy into your philosophy?

VF: “Well, it’s very important. I took great pleasure in that our team was fundamentally sound and we continually got great compliments from people in the NFL that have been around for a long time… We were a team that played hard. We tackled well. We made you work for everything and our guys played physical. To me, you got to be able to do those things to play good defense in the NFL, and I think we accomplished that.”

DS: When you prepare for a game each Sunday, what are the most important things that you want to go out and execute, both for yourself and for your defense?

VF: “Well No. 1 is you got to educate your team all week on the team you’re going to play. Every team represents a different set of problems or circumstances – who their best players are and what they do well and how do they go about winning games and having a successful game offensively.

“A big part of my job is calling the game on Sunday, and I’ve got to do the same as the players. I’ve got to learn the offense that they have and what we need to do to stop them. Every week you’re presented with a new set of circumstances and you have to adjust. Like in the playoffs with New Orleans, they were a wide-open passing team with a lot of weapons, whereas the Giants were a little bit more of a traditional NFL offense where they still like to run and the play-action pass.”

DS: How is Jim Harbaugh’s coaching style different from some of the other head coaches you’ve shared the sidelines with?

VF: “You know, Jim’s basically a young coach, even though he’s 47- or 48-years-old. He had a 15-year playing career as a quarterback, so while most guys have been coaching those 15 years he was playing, so he has a little different perspective … He’s a spontaneous guy, not a guy that reads the coaching manual 101 and does things the standard way.”

DS: How is the atmosphere in college football, and especially in Stanford, different from the pros?

VF: “Well, Stanford’s a little bit different than most colleges in that it’s a strong academic institution and doesn’t quite have the following, per say, like a Penn State or a ‘Bama … It’s not the same as in you don’t spend as much time with the players as you do in pro football because these guys are students No. 1. You’re limited to how much time you can spend with them during the season.”

DS: At Stanford, you were coaching right next to Andrew Luck as he was playing and you experienced the phenomenon that he brought to the sport and to college football. How do you think he will fare in the NFL?

VF: “Yeah, Andrew’s a great quarterback and I expect him to succeed in the same way in the NFL, wherever that may be. Great person and he’ll have a lot of success in pro football. He’s a great leader and a great talent. He’s got everything going for him.”

DS: Who were some of the best players that you’ve been able to coach over the years?

VF: “Well, when I started in New Orleans, we had Ricky Jackson, who made it into the Pro Football Hall of Fame last summer. Sam Mills, who I believe should be in the Hall of Fame. He was a guy I was with for [about] 15 consecutive years … Then I was able to be with Cornelius Bennett toward the end of his career [and] Kevin Green. Here at San Francisco, we’ve got Justin Smith [and] Patrick Willis. [There were] great players in Baltimore, being around Ray Lewis, Ed Reed and Haloti Ngata.”

DS: Has being around any of those guys shaped your philosophy on defense at all?

VF: “More than anything, it set the bar high. So now I know what great defensive players look like. When people start calling average players great, I stop them and tell them, ‘No, that’s not greatness unless you know what greatness is and [have] been around it enough.’ Those guys, all they did was show me what a great player is and set the bar of my evaluation of what a great player is.”