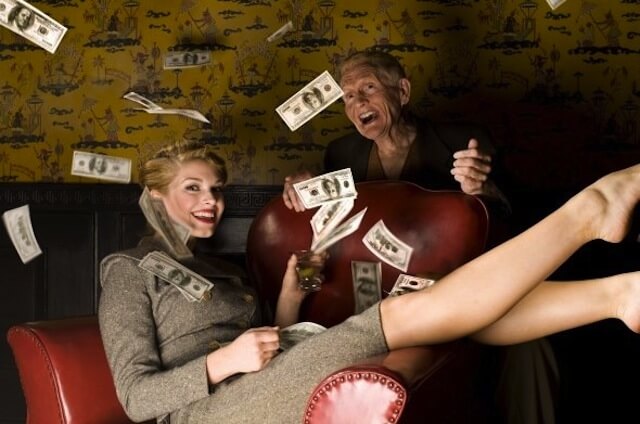 Let’s face it: college is expensive. Not only is the prospect of paying back loans until we’re middle-aged a looming thought, but just getting around the everyday expenses such as books, dorm essentials and that daily cup (if not more…) of coffee can be a struggle.

Among the masses of college students who attend class by day and work at minimum wage-paying jobs by night, are students who turn to “sugar daddies” to cover such expenses—but these wealthy providers are giving more than weekly wages–averaging $1,000 to $3,000 per month for their collegiate “sugar babies” in exchange for companionship, company and bluntly, sex. This “Sugar Baby Phenomenon” is no new concept, but the ever-increasing number of college students offering their company to older, wealthy benefactors is quite new.

Ever since the recession of 2008, the number of student sugar babies has been on the rise. With employers cutting jobs and unemployment at 9.1 percent, according to the U.S. Bureau of Labor Statistics, the number of sugar baby and sugar daddy arrangements continue to experience a steady growth. Recent graduates are both over-qualified and underpaid for the jobs they do decide to take because employers sacrifice high paying jobs to save money and prefer to hire employees for their low-wage paying jobs that require less skill. The Census Bureau also recently reported that since 1990, the average annual cost of college tuition has more than doubled for both private and public institutions. With a bad economy, a high unemployment rate, and elevating tuition costs, the conditions present bleak options for paying off student loans quickly, and for some students, being a sugar baby may seem like a simple way out: but is it?

In 2009, there were 300,000 members on SeekingArrangement.com, the premier sugar “arrangement” website dedicated to providing “mutually beneficial” relationships for sugar daddies and sugar babies alike. Just two years later, SeekingArrangement.com now boasts more than 800,000 members with female sugar babies outnumbering sugar daddies ten to one. The website founder, Brandon Wey, says that his site provides arrangements that are mutually appealing because the beautiful sugar babies have the means to pay off their loans and receive mentorship from their older counterparts, and the old and wealthy get to spend intimate time with beautiful women who wouldn’t otherwise pay any attention to them.

Sugar baby membership is free while sugar daddies fork over $50 a month to be members of SeekingArrangement.com and some even pay $2400 annually, to be a part of the Diamond Club. Members of this club are willing to pay because Wey ensures that they’ll attract the most interest—he validates each Diamond Club member’s identity, annual income, and net worth. This makes Diamond Club members more attractive to sugar babies because they know that they won’t be wasting their time with someone who may not be able to pay up. On top of that, Wey makes sure Diamond Club members’ profiles show up most often on profile searches.

It would seem that Wey knows exactly how seductive an industry that provides the answer to financial crises is to college students. Wey pays for SeekingArrangement.com ads to appear whenever someone types “student loan” or “help with rent” into a search engine; another arrangement-making website, SugarDaddyMeet.com pays for its ads to appear whenever someone searches “tuition help.” SeekingArrangement.com even offers students with [dot] edu e-mail addresses a free upgrade to become premium members, allowing them to send unlimited messages to potential sugar daddies. These strategic marketing tactics have definitely been working; in fact, an article from the Huffington Post states that SeekingArrangement.com has seen a 350 percent growth in the number of college students since 2007, adding up to more than 170,000 college sugar babies in July of 2011.

The question of legality then arises with many wondering if these arrangement websites are really just virtual brothels. Technically, prostitution is strictly considered the exchange of sexual intercourse or sexual “favors” for money. When sex is accompanied by companionship and money is accompanied by mentorship, it is difficult to make a case for prostitution in terms of the Sugar Baby Phenomenon. Concerns regarding this highly popular trend extend far beyond the realm of mere legality.

Other Issues to Consider

Dr. Angie Beeman, Assistant Sociology Professor at the Borough of Manhattan Community College explains, “There is a saying by sociologists that goes, ‘When America gets a cold, people of color get the flu.’ Those most vulnerable during bad economic times tend to be people of color and women.” The impact of the Sugar Baby Phenomenon on minorities is a major concern because minorities are often underrepresented in increasingly lucrative enterprises. “Those who fit these social statuses may have less ‘legitimate’ money-making options available to them. Women continue to be over-represented in occupations that offer low wages and when faced with the options available to them, they may ‘choose’ to enter the sex trade to make ends meet,” explains Dr. Beeman.

Another pressing issue is the commoditization of bodies (women’s bodies in particular). Professor Steven Parker of the Sociology department at Glendale Community College partially attributes this phenomenon to “a culture which has made youth, beauty and sex commodities.” Parker asserts, “Combine [the commoditization of bodies] with exploding costs of education and a weak economy, and one can surely see how the “sugar daddy” option is gaining popularity.”

It may be an increasing trend, but does that mean that all students approve of these arrangements? Well, no. The emotional, physical and ethical issues with these arrangements leave them as a subject of high debate.

Jacqueline Sanchez attends Northwest Missouri State University and sympathizes with the sugar babies, “I personally think that’s a really sad situation that students basically have to degrade themselves in order to attend college and get an education to help better their lives.” She pauses for a moment. “I guess it just shows how bad the economy really is and how schools need to do more in terms of financial aid or provide more opportunities for students to get an education so that they don’t have to meet random people online and ‘date’ them for money.”

Stephen Pou of Fairfield University offers an entirely different opinion of the phenomenon: “I don’t feel sympathetic because there are definitely legitimate ways that you could make money. There are a lot of job opportunities out there for college kids and for a kid to choose that path… it’s like taking the easy way out.”

The Sugar Baby Phenomenon has seen an increase in popularity, but professors and students alike can’t help but question: are the perks really that sweet?

Previous Post:Where Were You on 9/11?
Next Post:PJ Harvey Wins the Mercury Prize for the Second Time