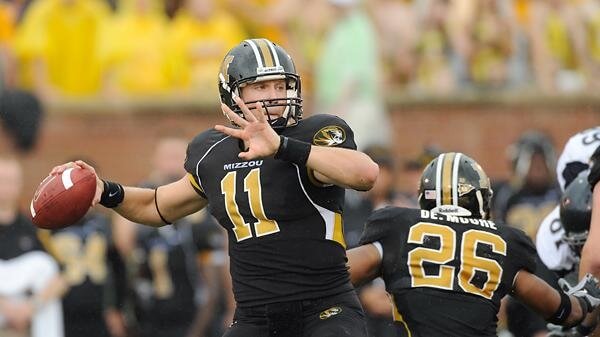 I have seen every game in Blaine Gabbert’s collegiate career, and as a man who watches quarterbacks rather critically, I feel at least somewhat empowered to analyze Gabbert’s projects going forward.  I should start by confessing that as a student at the University of Missouri I am subject to some form of bias.  I’ll admit it — I want to see this guy succeed and I will root for him in the NFL.

Right from Gabbert’s first start against Illinois in 2009, I knew he had some serious potential.  Over the course of that season, I learned that Gabbert had a great arm, that he could make plays with his feet and had the potential to be really good.  But potential is the key word.  He was rated as the fifth-best QB prospect out of high school by ESPN.  Mel Kiper ranked Gabbert in his Top 5 Juniors the whole season this year.  So we know he’s been on people’s radars, but he has yet to fulfill people’s hopes.
He throws footballs – we can at least agree on that.
During the 2010 season, I hoped to see Gabbert work on his footwork, his pocket presence and his ability to read coverages.  Unfortunately, he really didn’t improve his game all that much.  I think Gabbert’s footwork in the pocket was noticeably better and he pushed off his back foot instead of “arming” throws this year, but in ‘09 he had a hard time throwing off that right ankle due to injury, so it’s hard to say if he improved in that area.  Also, Gabbert still seemed flustered in the pocket when his primary option was covered and I had hoped he would be able to go through his progressions much better.  Another negative is that Gabbert is very raw in knowledge of the NFL route tree.  He is very accurate on throws he has worked with in practice, but he needs time to work on many throws that will be relatively new to him.
Having said that, Gabbert is still one of the best quarterbacks in this draft class.  Quarterbacks are naturally over-drafted, and there is no clear favorite this year.  If it were up to me, I wouldn’t draft Gabbert in the top half of the first round because he has a lot of learning to do.  I fear that he will be thrown into the fire too quickly and won’t be given a fair opportunity to grow into the player he has the potential to be.  Potential is the key word.