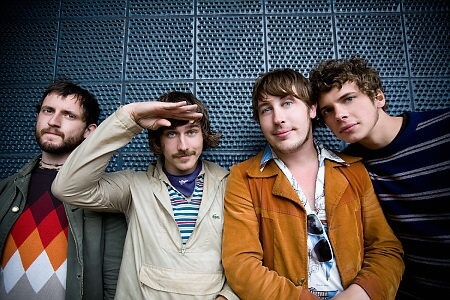 Portugal. The Man Has Got It All

Josh AxelrodOct 19, 2011
Home » Latest Posts » Portugal. The Man Has Got It All
FacebookTweet
There is no typo in the band name for Portugal. The Man. That period not only has a purpose, but, according to Portugal drummer Jason Sechrist, is a symbol of just how far this band has come since it released its first album, Waiter: "You Vultures!" in 2006.
“When the band first started, we were a nobody club band that no one gave a s**t about,” said the Portland, Oregon native.  “We never expected things to get as big as they are, so now we have to explain it.  It represents a fake character of Portugal who is like The Beatles’ Sgt.. Pepper or Ziggy Stardust.”
People are beginning to notice that Portugal is indeed The Man.  Between the tours, festival performances, and signing with a major label (Atlantic Records), Portugal. The Man is blowing up.

The band topped the indie record stores sales charts in July and the college radio charts last month. Portugal has also amassed 20,965 Twitter followers and their music video/short film “Sleep Forever” has 155,091 YouTube views.
Sechrist described Portgual as “a heavy pop band with an effects twist.” They’ve been enthralling audiences on their world tours and at festivals like Lollapalooza, Bonnaroo, and SXSW with their unique brand of psychedelic rock since 2005. And if you haven't seen them yet, they'll be in Washington, DC at 9:30 Club on October 25.
Lead singer John Gourley started Portugal in Portland as a side project to his other band, Anatomy of a Ghost.  When Anatomy broke up in 2004, Gourley went home to Wasilla, Alaska and shifted his focus to the new band.
Only two of the five original Portugal. The Man members remain: Gourley and bassist Zach Carothers. Sechrist didn’t join the group until 2005.
Once the band added keyboardist Ryan Neighbors and multitalented Noah Gersh (who plays guitar, tambourine, and bongos), they became the Portugal. The Man we all know and are discovering today.
They certainly put in the effort to get to this point, releasing six albums in six years. “We just don’t want to give ourselves any off time,” Sechrist said. “During the holiday season, John goes home to Alaska, writes some demos, and sends them to us. After the break, we start the recording process.”
Portugal released its most recent album, In The Mountain In The Cloud,

on July 19, 2011. They had the luxury of working with Grammy-winning mixer Andy Wallace, who has mixed for bands like Rush, System of a Down, Nirvana, and Paul McCartney.
“This was the first time we had an outside mixer,” Sechrist said. “When we heard Andy Wallace was mixing for us, we gave him free reign.  In general we’re fans of effects and many different instruments making different sounds. “

Find schools
Music has always been a huge part of Sechrist’s life, though it wasn’t until he began watching his best friend’s older brother’s metal band play that he started to seriously consider making a career out of it. He never attended a university, but Sechrist did take art and music-related classes at a Portland community college.
“That’s when I was trying to break the ice between, ‘Is this worth pursuing or not?’ and ‘Am I going to be able to handle this?’ I was one of the top three drummers in my class, though that’s not saying much. I found out [music] was my natural gift.”
Sechrist has parlayed that gift into a successful stint with Portugal. The Man, but the road to stardom hasn’t been completely smooth: after their show at August’s Lollapalooza, the group discovered that their van, trailer, and all of the group’s instruments and gear had been stolen. The band turned to social media to try to find their equipment.
“We started Twittering and before we knew it, local news outlets in Chicago wanted to interview us and we told our story,” Sechrist said of their efforts, which eventually did pay off. “It spread around so far before someone eventually saw our van and trailer.  It only took three or four days of continued heavy pressing of the subject to find it.
“It’s crazy we found it all in Chicago. The only reason we found it is that we had so much stuff. It would be like if someone stole a semi truck and someone else saw them loading 50 kegs of beer out of the truck into their place.”
With that problem resolved, Portugal continued its American tour. Next up: flying to Europe to play with The Black Keys and then heading down under for a festival in Australia.
For anyone trying to duplicate Portugal. The Man’s success, Sechrist’s advice is blunt but important to know if you’re a wide-eyed college student with a band waiting for your big break: “The business aspect is very vague and brutal,” he said. “But you should still give it a try. Practice makes perfect. Good opportunities will come through trial and error. A lot of it will come after you’ve tried 100 times and people begin to come to your shows.”
He added that if none of that is working, then it’s time to make a change. Not everyone can be The Man right away. Unless, of course, that man is Portugal.
Photo: Michael Loccisano/Getty Images North America at zimbio.com
FacebookTweet
Life Music Festivals Party

Previous Post:Knocking the Flu Out Cold
Next Post:The True Cost of College