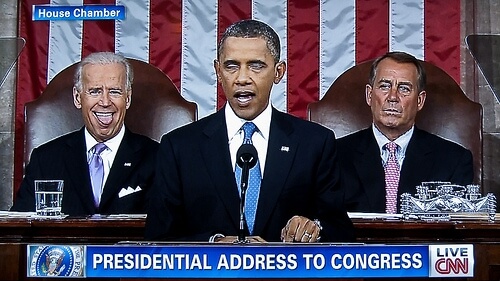 Politicians are funny, funny beings. They are always out to make statements that establish their status as a leader. But often, like all of us, they flub. They make a mistake, and end up giving us some of the best quotes of our day. Here are a few from recent years:

''I love this state. The trees are the right height."
–Mitt Romney on Michigan

''I'm ready for the 'gotcha' questions and they're already starting to come. And when they ask me who is the president of Ubeki-beki-beki-beki-stan-stan I'm going to say, you know, I don't know. Do you know?''
—Republican presidential candidate Herman Cain


''I will tell you: It's three agencies of government, when I get there, that are gone: Commerce, Education and the — what's the third one there? Let's see. … OK. So Commerce, Education and the — … The third agency of government I would — I would do away with the Education, the … Commerce and — let's see — I can't. The third one, I can't. Sorry. Oops.''
—Texas Governor and GOP presidential candidate Rick Perry, experiencing an epic onstage brain fart during a GOP debate in March 2011


"When we were in college we used to take a popcorn popper, because that was the only thing they would let us have in the dorms, and fry squirrels in the popcorn popper."
–-Ex-Senator and presidential nominee Mike Huckabee just talking about casual South Carolina meals


"Too many good docs are getting out of the business. Too many OB-GYNS aren't able to practice their love with women all acros the country."
–President George W. Bush making us all wonder what goes down at his doctor appointments, on September 6, 2004


"You cannot go to a 7-Eleven or Dunkin Donuts without a slight Indian accent. I'm not joking."
–Joe Biden being politically incorrect on CSPAN


"Let me be clear: Israel is a strong friend of Israel's."
–Barack Obama stating the obvious


"Damn bitch set me up!"
-Washington D.C. Mayor Marion Barry after being busted in a sting operation that revealed him smoking crack with prostitutes

Previous Post:Summer is Crack for your Brain
Next Post:Baby Daddy: Derek Theler talks about his new hit show