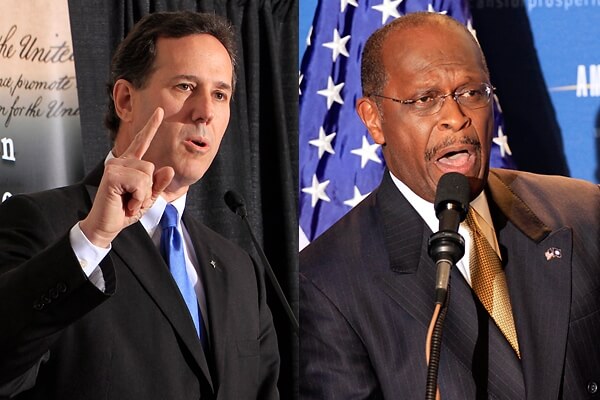 I sometimes wish politicians would forego their prepared speeches once in a while and act a little more genuine. Then they do that, and I realize why they usually stick to the script. Forget about kids: it’s politicians who say (and do) the darndest things:

On Sunday night at a campaign stop in Wisconsin, Rick Santorum called Mitt Romney the “worst Republican in the country to put up against Barack Obama.” That same evening, The New York Times’ Jeff Zeleny tweeted this:

“I ask Santorum if Romney is ‘worst Republican’ to run. He says: ‘Quit distorting my words It’s bullsh*t.’ He says he was talking health care.”

Santorum had this to say in his defense on Fox & Friends yesterday: “If you haven’t cursed out a New York Times reporter during the course of the campaign, you’re not really a real Republican.”

Wait, Rick Santorum swears? I didn’t think he had it in him. Way to prove me and most of the U.S. wrong, Rick! I’d still vote for Herman Cain over you, and he hasn’t been in the race for months. Speaking of the Godfather…

Herman Cain is sick of stimulus. He’s also sick of debt, ObamaCare, spending, and big government, among other things. He wants you to tell him what you’re sick of at his website, sickofstimulus.com.

No big deal, right? Well, in order to earn his site some traffic, Cain made a few ads. One of them features a dying fish out of water (literally) that represents “the economy on stimulus” while a young girl asks, “Any questions?” The other (and most disturbing ad) features a rabbit being launched from a catapult and shot by a man with a rifle, which symbolizes “small business under the current tax code,” while the same little girl asks, “Any questions?”

The man makes his point, no question about that. But I feel like most people will be more focused on the fact that a BUNNY WAS KILLED in his ad. While I’m sure that rabbit is somewhere munching on carrots and outsmarting Daffy, Mr. Cain should probably get ready to receive a few thousand angry letters from PETA.

Wait, That Microphone Was On The Whole Time?

Not to be outdone by the right wing, Obama had his own “Doh!” moment yesterday at a meeting with Russian President Dmitry Medvedev. This conversation between the two leaders was picked up by microphones without either of them apparently realizing it (transcript courtesy of The Telegraph):

Obama: “On all these issues, but particularly missile defense, this, can be solved but it’s important for him to give me space.”

Obama: “This is my last election. After my election I have more flexibility.”

Medvedev: “I understand. I will transmit this information to Vladimir [Putin, his successor].”

There are much worse things the microphones could’ve caught him saying, but Obama is basically saying that his re-election is more important than international issues like missile defense. At least he didn’t say anything he might regret about another world leader…oh wait, that already happened. Good times.