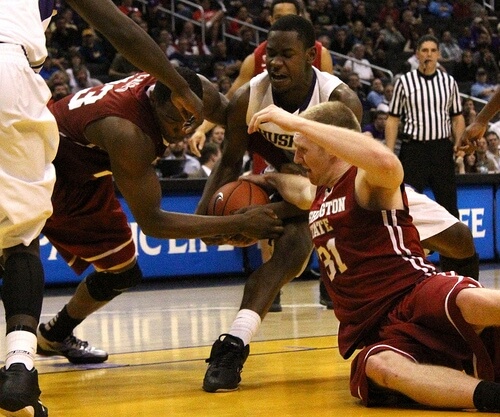 The name may have changed, but the balance of basketball power in the conference formerly known as the PAC 10 remains the same. The Pac-12’s new members, Colorado and Utah are not expected to shake up their new home in their first year. Perennial Pacific powers Arizona, UCLA, Cal and Washington are poised to dominate this conference once again. But the big boys should be weary of  Oregon, Stanford, and Oregon State, teams in position to make surprising runs at the Pac-12’s top ranks.

The overall play of this conference is expected to drop this season in comparison to last season. Teams lost lots of top tier talent to the NBA Draft this past spring. Arizona took the biggest hit with the loss of star Forward Derrick Williams. The Wildcats should be able to weather this loss with their strong freshman class that includes prospective star point guard Josiah Turner. Arizona will find it’s strength in a perimeter game attack propelled by hot handed guard Jordin Mayes.

UCLA brings the coference’s best front court into this season with the return of big bodied center Josh Smith. The Bruins boast 6 players over 6’8 including twin transfers from North Carolina, David and Travis Wear. UCLA should bully other teams in the paint, but must bring a perimeter game to win the conference.

Washington posses almost the exact opposite strengths and weaknesses of the Bruins. While the Huskies have put together a deep backcourt led by 6’6 shooting guard Terrence Ross, their front court could use some work. The huskies also lost their top three players of last season to the NBA draft, but bring back three superior guards in Tony Worten, Addul Gaddy, and CJ Wilcox.

Cal has the potential to pull off great seasons because they needed the least amount of tinkering Post-NBA draft this off-season. The Golden Bears return four of starters from last season, three of whom were the team’s leading scorers last season.  Conference Freshman of the Year, small forward Allen Crabbe returns this season as does guard Jorge Gutierrez who led the led the team  in points, steals and assists last season.

Oregon may be a contender as well, after acquiring two transfers and a strong freshman class in the off-season. Ducks fans should watch out for Freshman Jabari Brown, the country’s overall 26th best high school player in 2010-11 according to ESPN, at shooting guard. Brown is expected to start alongside returning star small forward E.J Singler, one of the best all around players in the conference.

Stanford and Oregon State have the potential to surprise Pac-12 fans this season, but players for each team must step up for these teams to improve. Stanford needs for sophomores guard Dwight Powell and small forward Anthony Brown to take on the role of leading scorers. Oregon State needs to find stronger secondary support for star guard Jared Cunningham if they wish to be successful this season.

USC, Colorado, Arizona State, Washington State, and Utah are all expected to take backseats in the conference this year. These teams need to buff up their roster before they can contend for the top ranks of this newly expanded division.