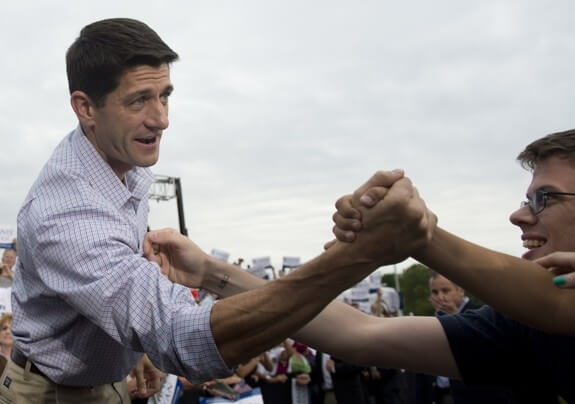 P90X and Politics: All You Ever Needed to Know About Paul Ryan

Kristen SaldariniAug 17, 2012
Home » Latest Posts » P90X and Politics: All You Ever Needed to Know About Paul Ryan
FacebookTweet

This campaign season, Paul Ryan must flex more than fiscal muscle to prove Mitt Romney chose the right vice presidential candidate. Come November, Americans will determine if his dedication to P90X is as strong as his political potential, or if his detailed budget plans and conservative social positions are weights young voters won’t lift.

Famously (or infamously) Mr. Ryan demands we confront the unsustainable, mandatory programs making up 40% of our federal budget; a challenge our age group should accept, considering how difficult it will be for us to maintain national safety nets if Congress doesn’t chill out and trim up. But he suggests we start with the discretionary 15% of the federal budget first, and Ryan’s Path to Prosperity doesn’t touch military spending.

Disappointing, especially if you believe Americans should start having productive debates about our military engagements. Still, Mr. Ryan has my attention if he can draw up two equally detailed plans to decrease our national debt that project results similar to a Starbucks junkie post one P90X circuit.

So maybe Mr. Romney flip-flops less alongside Mr. Ryan, the smart, hard-working guy that will chat about the benefits of a P90X routine with an intern just as easily as he spits federal budget numbers, explains troubling economic conditions, and challenges President Obama’s fiscal logic.

John Bennett, a senior at The George Washington University studying Economics and International Affairs, interned for Mr. Ryan on the Hill in the fall of 2010. “I’m really, really enthusiastic about the nomination. Ryan is not afraid to tackle issues considered politically untouchable,” Bennett said. “He’s willing to be honest and tough on what people don’t want to talk about.”

Bennett considers Mr. Ryan a visionary capable of mobilizing young voters in this election, and Crawford described the crowd gathered in Norfolk, Virginia for the announcement.

“The terms ‘electric’ and ‘energized’ are rarely used to describe the people who attend Mitt Romney's rallies, but that was the mood in the air in Norfolk on Saturday morning."

His energy, enthusiasm, and dedication to steering America along a sustainable path should get our attention because, “It’s not going to get any easier for us [to face one of the most hostile job markets for college graduates] unless we make it friendlier for hiring.”

Your employment opportunities are on Mr. Ryan’s mind all the time and it’s difficult to argue he will not actively push Mr. Romney to formulate a detailed, well-researched budget that addresses the deficit and attacks the national debt.

Bennett added, “He’s really down-to-earth, and very genuine. He remembers your name. Today, the standard politics is to craft public images out of cool headlines; what I love about Paul Ryan is his wonk political side but at the same time, his charisma, enthusiasm, and vigor.”

Whether you agree with his specific budget plans or not, Ryan wants Congress to face facts before you get screwed.

That said, he probably wouldn’t help you plan your best-friend-who-just-so-happens-to-be-gay’s wedding, even if he supports the ENDA to end discrimination by employers based on sexual orientation. But let’s ask the harder question here: why should we, America’s future, give him credit for something that obviously right anyway?

His pro-life views are extreme, he voted against the contraception mandate, and he’s not sending donations to Planned Parenthood. Yet, a panel on MSNBC hosting NOW representatives suggests young women, a major swing vote in this presidential election, are more concerned with how his budget plans affect Medicare and Medicaid. Of course, Medicare and Medicaid are equally threatened by unsustainable federal spending. So, show me the money.

Mr. Romney’s decision to nominate Paul Ryan gives our generation the opportunity to delve into fiscal issues that will affect us in the job market and beyond. He also gives us a chance to determine where Mr. Romney actually stands on social issues and will, hopefully, encourage us to demand our politicians act socially just and fiscally responsible. At the very least, we should admit that P90X is no ordinary work-out, and this Wisconsin native, with his abs of steel, is no ordinary politician. Think about it.