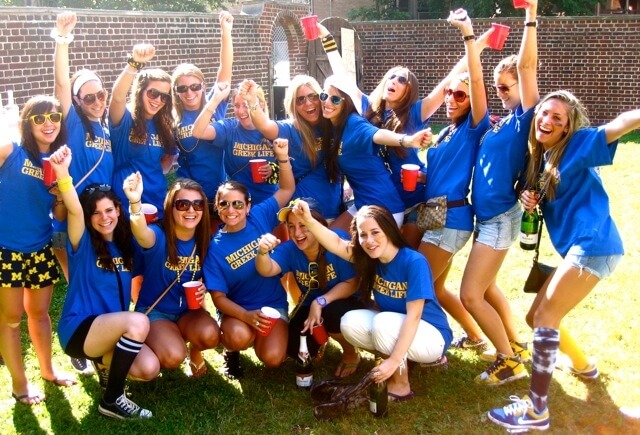 As the past three years of my college career flash before my eyes in a hazy blur of final exam studying, late-night partying, and football game cheering, the thought of what lies ahead after graduation has become more of an tiring responsibility than a passing afterthought. With job applications and graduate school exams hanging like an ominous thundercloud over our heads, it’s hard to remember that yes, college is a time for learning, but also a place for fun.  Although we seniors can no longer put our future plans on the back burner, our entry into the final stretch of the best four years of our lives calls for a little reminiscing: there are some things that won’t fly anywhere but in college…

Of course, once you’ve graduated college, there are still the hometown baseball tailgates, the grilling of the hot dogs, and the nursing of the beers.  But our football pregames are a whole different ball game.  Waking up at 7am for a 3 o’clock football game… my mom says it’s just crazy.  I smile, shake my head, and say no… it’s just college.

In college, I think it’s safe to say that many of us choose our classes based partly on which will allow for the longest amount of REM.  Unfortunately, once the glory days have passed, this form of prioritizing may have to graduate as well.  Somehow, I don’t think your boss will be very enamored with the idea of you strolling in just in time for lunch break…

From 70s mixers to toga parties to the ever-popular CEOs and Corporate Hoes themed festivities, college gives us the opportunity to present ourselves in ways that may not be deemed socially acceptable to the “real world.”  Life as an undergrad comes with the chance to put together outrageous outfits while suffering next to no snide judgment.  After all, everyone else is doing it too!

In no way am I endorsing allowing yourself to become a one-woman brothel (or a one-man brothel, for that matter)… but after college, most people have booked themselves a 1-way ticket to Monogomyville.  That being said, I suggest getting it out of your system now.

According to a study by researchers at UC Berkeley, depriving yourself of sleep in order to cram for that midterm you forgot about leads to a boost in your pleasure circuitry and feelings of euphoria.  In fact, people with clinical depression often feel more optimistic after a night of no sleep.  Even though a night of sleep can occasionally be sacrificed for some extra hours of study time, research findings show that people in demanding professions can’t afford to deny themselves sleep.  So use up all your all-nighters now, because pulling one of these once you’re in the real world will most likely cause your focus to dwindle at work… not to mention you’ll be scrapping happy hour for some quality time with your pillow.
FacebookTweet
Life