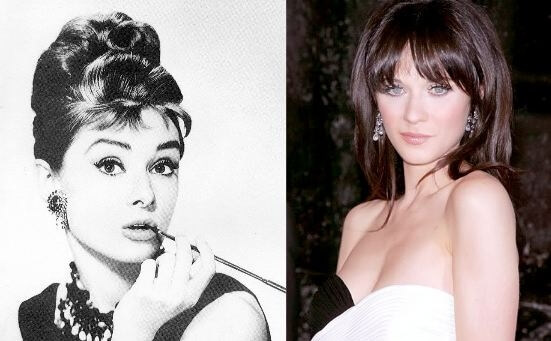 Now and Then: Who Is Today’s Audrey Hepburn?

Timeless characters seem to transcend decades. Whether it's the past oddities of Christopher Lloyd or the modern quirkiness of Johnny Depp, notable actors retain a certain style that can be tracked through various films and television shows. Check out the list of Now and Then actors from CM that compares past and present talents from stomach-clutching comedy to overall badassery.

“I take 'em to Harlem. I don't care. Don't make no difference to me.” (Robert De Niro, in Taxi Driver)
“Maybe, maybe not, maybe f–k yourself.” (Mark Wahlberg, in The Departed)

Sense anything in common between these two beautiful, macho superstars? Their presence combines hard-hitting danger with sexy, intellectual arch and the result? Cinematic bossness.

Basically the best match-up ever—two tiny, sweet-as-can-be, beautiful, talented actress-singing combos. How did we not see this before?

The Yoko Ono of today? A toss-up between Miss Ingrid Michaelson and the lovely Brandi Carlile. Brandi wins out, only because although both adopt Yoko’s bucolic elegance, Brandi’s openhanded voice speaks out in a way that echoes the activism of Yoko Ono. After working with the nonprofit organization Reverb, Brandi began The Looking Out Foundation in 2008, promoting charity just as Yoko led peace and human rights activism in the 1960’s.

If you haven’t spent a considerable amount of time tracking these two on YouTube, then you are seriously missing out. Bea Arthur changed the comedy industry with her timeless humor and made incredible strides for female comedians. And, well, I don’t even need to tell anyone how hilarious (ahem, Boston College graduate) Amy Poehler is.

Even similar in appearance, these two comedic icons represent the separate slapstick icons of their respective generations. In fact, it’d be pretty easy to guess that Inspector Clusoe and Maxwell Smart would be two peas in a pod.

They bring the ultimate thought-provoking, cerebral messages to the film industry. Perhaps most famous for his role as Atticus Finch in To Kill a Mockingbird, Gregory Peck impacted Hollywood irreversibly during the rise of film popularity. Likewise, with leads in incredible productions like The Pursuit of Happyness and Seven Pounds, Will Smith is changing the world on a yearly basis.

Both famous for their good looks, charm, and cerebral and romantic roles, Cary Grant and Leonardo Dicaprio are a natural pairing. In Grant’s day, the American Film Institute named him as the “Greatest Male Star of All Time.” Little did they know, Leonardo could come and steal the title many years later (winning a Golden Globe Award eight times.) Grant’s roles include The Philadelphia Story, My Girl Friday and The Awful Truth. Dicaprio’s starring roles include famous films like The Aviator, Titanic, Gangs of New York and Inception.

Christopher Lloyd is unique in his acting style and ability, so it feels almost wrong to suggest that his talent could be mainstreamed and paralleled to another actor. However, Johnny Depp is about as inimitable as they come. With an inconceivably diverse range of roles, from Rango to Willy Wonka to Jack Sparrow, Depp certainly fits the bill of a method actor of acute awesomeness. For that reason, CM suggests that Johnny Depp is the Christopher Lloyd of today.

Perhaps an illustration of just what the media has come to be. Paris Hilton’s Teacup Chihuahua Tinkerbell Hilton has reached a point of fame unrivaled by other animals—wow, are we really talking about animal fame here?—and to the point that some may call “Mr. Ed level.” Mr. Ed, played by Palomino horse Bamboo Harvester, had his own show in the 1960’s, placing him at the top of the animal movies hall of fame even before our parents’ generation.
FacebookTweet
Life