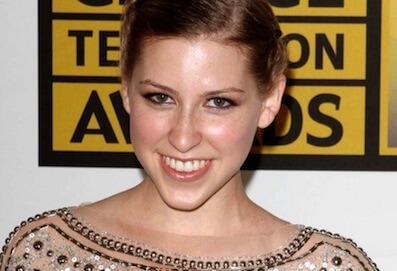 Not Your Average Yoga Buff: CM Interviews Eden Sher from ABC’s The Middle

Eden Sher may be 20 years old, but you won’t find her rushing around, buying books, and studying for exams along with the rest of us. Nope, she’s too busy chasing her dream as the break out star on ABC’s hit television series, The Middle. But the actress and self-proclaimed yoga buff doesn’t feel like she’s missing out on college at all.

“I was actually all set to go to college after high school,” says Sher. “But I booked the show the spring of my senior year, and decided this is an opportunity that doesn’t come around very often. I pounced on it and haven’t regretted my decision at all,” she explains.

From a very young age, Sher loved to perform. The more theater classes she was involved in, the more she realized her passion for acting. When she was nine, she finally convinced her mother to let her get an agent, which eventually led her to land her current role as the ever-hopeful teenager Sue Heck, a socially awkward early-teen middle daughter of Frankie and Mike on ABC’s The Middle. Sue’s genuine nature, bubbly personality, and persistent optimism tend to make her an object of ridicule, especially by her brother, but according to Sher, it’s the role of a lifetime.

“Playing Sue is pretty much a dream come true. I get to squeal and jump and make the world’s goofiest faces and get paid money to do so” says Sher who also admits to not being as confident or optimistic as her character when she was in high school. “I was an angsty theater-nerd,” she says.

When she’s not on camera, Eden Sher is a huge yoga buff. She started practicing yoga at the age of 12 and even ventured all the way to India for six weeks for a retreat. What does she love about the art? “Stretching, breathing, crying and sleeping are my four favorite activities. Yoga incorporates at least two out of those four, and sometimes even three if I’m lucky.”

Whether she’s being nominated for a major acting award or traveling the world on a yoga tour, it’s safe to say that Sher does not feel like she’s missing out on “regular” young life.

“I have had a solid group of friends since I was ten years old, and not attending college has not seemed to hinder my social experience as a young adult in any way,” she reflects.

ABC’s hit show returns tonight for its fourth season with a special full hour episode. What quirky things does Sue and the rest of her family have in store for this season? There’s only one way to find out. Tune in!

And be sure to check out some hilarious Sue-cessories from the show–lessons Sue has learned on the show. Here are a couple: