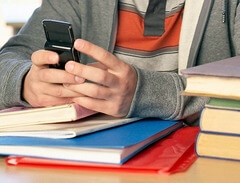 Our generation is notorious for our obsession with technology; everywhere we go we have some type of portable smart device attached to our person. Blackberry’s, iPhones, iPads and laptops are becoming trendier accessories on college campuses than oversized watches, designer handbags and leather boots. Unfortunately, it may be these devices that are the reason behind a lack of focus in many college lecture classes.

In a study conducted by Wilkes University, it was found that 91% of surveyed students admitted to using their smartphone to text during class time. Of these students, one third said they believed that sending these texts negatively affected them whether be it loss of focus or poor grades.

However, many students also believe that this is an inevitable fact. Because the technology boom has affected our generation so drastically that it has become second nature for us to use said devices so frequently. Society expects us to have many of these devices – for example, many freshmen are expected to have their own laptops – which causes us to feel as though we need to use them on a regular basis.

Additionally, a study conducted at the Catholic University of America found that the lack of attention students pay in lectures could just be human nature. The study found that students actually “alternate between being engaged and non-engaged in ever-shortening cycles throughout a lecture segment.” Because of this, many professors find that interactive teaching methods that require physical involvement by students find that they remain more focused and for longer periods of time.

While we rely on our smartphones for so many “important” things in our lives, after reading this we sit down and start to think about what really is important.