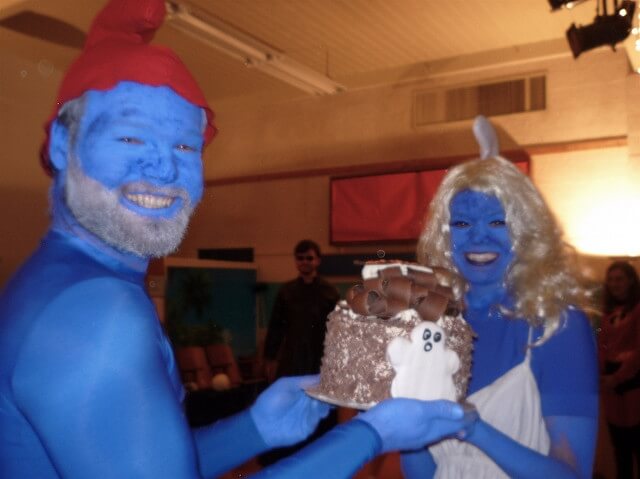 As the calendar days creep closer and closer to October 31, some college students and their sweethearts may still be pressed for costume ideas. Halloween is the one holiday that demands the most irreverent and garish attire and, let’s face it, who wants to be tagged in a Facebook album with their guy or gal wearing something cliché? Don’t worry; as always, College Magazine has you covered, with some costume ideas for couples that are sure to turn heads.

A Dry Erase Board and a Marker

A staple of all college dorm rooms, the dry erase board is beholden to such integral memos between roommates such as “I know you ate my cheese doodles” or “Need beer for party.” For the carefree, fun-loving couple: have one person dress up as the dry erase board (which, if pressed for tools, simply wear a matching white shirt and pants that can be written on) and the other dress up as a marker. The person dressed up as the board can be inundated with colorful phrases and innuendos directed toward their marker-clad counterpart (i.e., “She’s marked her territory” or “He’s got sex appeal written all over him.”)

Helen of Troy and Paris

Before becoming a popular brand of latex condoms, the term “Trojan” most often referred to the “Trojan War,” which was detailed in Homer’s Iliad, for those of you who may have slept through first year English seminar. Also recounted was the epic story of forbidden love between Helen of Troy, Queen of Sparta, and Paris of Troy. This costume selection eloquently portrays that the couple has a timeless romance.

The incessantly controversial Lady Gaga topped herself once again by dressing in drag to portray her rakish male love interest in the video for You and I, named Jo Calderone. Both Gaga and her male counterpart Calderone emanate sex appeal, making this costume choice playfully provocative. Just as Gaga persists in surprising with her inimitable flamboyance, the couple clad in this type of garb will also emit that they have a relationship which cannot be duplicated.

A Ghost and Pacman

Chase some tail (i.e. the girlfriend/boyfriend dressed as Pacman) with this mischievous costume coupling. The nostalgic couples who have retained their inner child even as they parlay into adulthood will impress and incite giggles in these getups.

A Proton and an Electron

For all the chemistry majors and science-savvy students, medical student Paul Gallo of Temple University in Philadelphia, PA has a costume idea for couples who aim to prove that opposites really do attract; “Have one person dress up as a proton and one person dress up as an electron; protons and electron are positive and negative charges of an atom,” a basic building block of matter that makes up everyday objects.

Two of the most popular social media forums among college students, dressing up as these two internet giants offer students a plethora of costume options and ample room for creativity for tech-savvy couples with an affinity for social media. For example, one individual could represent Facebook by dressing as a relationship status with a heart and thumbs up; the individual representing Twitter could dress as a blue bird and display a sexy innuendo about their Facebook counterpart with a hash-tag (i.e., “I took Facebook off the market #AfterITookOffHerClothes).

Kurt and Blaine from “Glee”

This pairing is a perfect choice for artsy couples or just those who are fanatical over the show. Last season on the award-winning Fox hit Glee, the musical comedy broke new ground by showcasing a storyline between Kurt Hummel (played by Chris Colfer) and Blaine Anderson (played by Darren Criss), two openly gay students whose relationship developed from friendship to romance throughout the season.

Never have walking risks for skin cancer yielded such high ratings since George Hamilton was popular. For the pair who doesn’t mind showing some skin or causing a stir, dressing as one of the many Jersey Shore duos offers many scandalous choices in attire. Couples should be sure to come prepared, however, if they plan on using a “smush room” by the end of the night.

For the couples who always exude romance–and class–donning attire identical to that of the most prominent duo of the year can add a touch of refinement to the characteristically raucous holiday. Couples who have been together long enough to constitute their relationship as “long-term” and “serious” can emulate the royal newlyweds to display that their love is one that will endure far past graduation.

Previous Post:Football Is All In On Breast Cancer Awareness Month
Next Post:Don’t Dread The Date Party