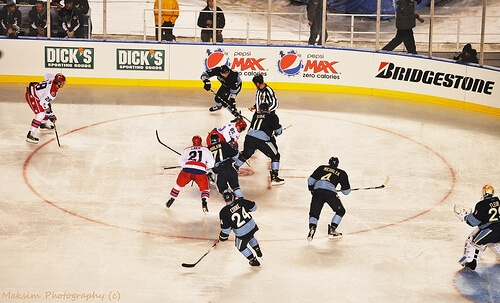 NHL Lockout is (Possibly) Over

Hey, hockey fans! In case you didn’t hear, the news you have been waiting 113 days for has finally been announced: the 2012-13 National Hockey League lockout is over. At about 4:45 a.m. Sunday, the NHL and the Nation Hockey League Players’ Association reached a tentative agreement.

The NHL and NHLPA agreed upon a 10-year deal, with an optional opt-out after eight. The salary cap has been stated to be $64.3 million with a floor of $44 million.

“I think it's good that the players finally agreed to settle on an amount, but it’s a little ridiculous that it took so long,” said Jackie Catania, an Oakland University, nursing student. “Part of me doesn't want to watch it because I feel like the players are greedy and don't have the right ambition to play.”

According to CNN, NHLPA Executive Director Donald Fehr said he is hopeful the next steps "will proceed fairly rapidly and with some dispatch and we'll get back to what we used to call business as usual as fast as we can."

“It’s about time. The NHL lost a lot of credibility, and towards December, I was honestly losing any hope of having a season,” said Aaron Jordan, a sophomore studying journalism at Michigan State University. “I am glad the lockout is over to say the least.”

An article written for sbnation.com stated, “We lost 628 games to cancellation, it cost the league countless millions of dollars and left us with burning resentment for the business that is our favorite sport. But it's over.”

There are many bitter fans due to the strike. It cost almost half the 2012-2013 season, the Winter Classic in Detroit and the All-star Game in Columbus, Ohio. It has people wondering how the NHL will smooth things over with so many upset hockey lovers. It would likely help if they are able to save the second half of the season and even give their fans the Stanley Cup playoffs.

ESPN’s recent article on the event discusses the setbacks the lockout has created for itself in terms of having a season this year. When it comes to ad money and sponsorships, ESPN reported that most businesses have already moved into other commitments.

“McDonald's was supposed to be a key NHL sponsor with an ad campaign tied to the Winter Classic, All-star Game and other high-profile events, but it moved on and signed a two-year deal with the NFL after the lockout started.”

The lockout has been really hard on NHL fans, explains Bre Ramos, a psychology major at MSU. They are a very tight-knit, dedicated fan base. She said it has felt like a huge part of their life was missing. Ramos also said there really aren't any words for how ecstatic and relieved fans are to have the game back

“I've raised the question several times about what's going to happen with Gary Bettman now,” said Ramos. “This is the third lockout since he was named Commissioner of the NHL. I feel like the immediate concern about when he will be fired is something we all are thinking about.”

The Washington Post quoted NHL commissioner Gary Bettman on the status of the contract. “We’ve got to dot a lot of I’s and cross a lot of T’s,” Bettman said. “There’s still a lot of work to be done, but the basic framework of the deal has been agreed upon.”

The deal still requires consent from players and NHL’s Board of Governors before any pucks hit the ice. Officials are saying that the league is expected to play a 50- to 48-game season that will start by Jan. 19.

Previous Post:New Year Resolutions: College Edition
Next Post:Can I Have Sex if I Have My Period?