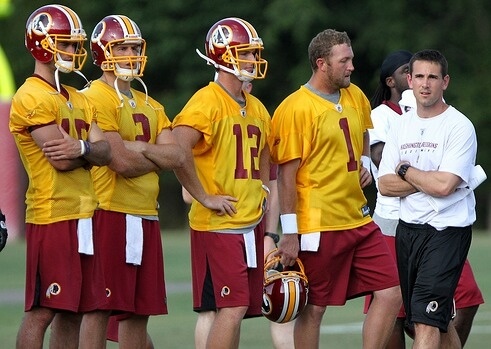 I’m not one to brag, but I am currently sitting at 9-0 on the year for my predictions. Granted, my score predictions are not always close to how the game plays out, but the winners are there. Am I a writer, or a football-picking machine? Like I said, I’m not a braggart

In my week three installment, I will attempt to keep my hot streak going, so here goes nothing.

Yeah, yeah, both of these teams are 2-0. Let’s get real here. Is this really a game? Ryan Fitzpatrick went to Harvard – I get it. He has a beard. He is an above average quarterback. Ryan Fitzpatrick, meet Tom Brady.

In what shapes up to be week three’s highest scoring game, Matt Schaub takes on Drew Brees in what will be a battle of offenses. I think that this game will come down to which team can establish (somewhat of) a run game. If Foster is out, I give the nod to the Saints.

If Vick plays, this game is a blowout. If Vick sits, the Eagles will still win due to their superior talent on both sides of the ball, but they will certainly not win in blowout fashion. So I don’t look like an idiot, I will take the middle ground for my score prediction.

The NFC South is the toughest division in football. They have three teams that could easily get to 10 wins, and if Cam can continue his little run as a dominant pocket passer, I could see the Panthers winning a few division games and getting to 6 or 7 wins. This game is the start of what is going to be a grind for all four of these teams, and both the Birds and the Bucs want it bad. This game is sort of a toss up for me, but I will give the edge to the home team.

I get it. The Redskins are 2-0. They surprised me. They have actually played okay. Anyway, I’m not buying it this week. I feel like they play at home every week so when they play at Dallas for their first road game, Romo or no Romo, I am going to pick against them.