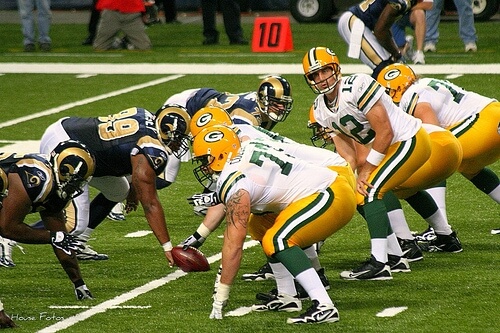 After a tumultuous seven months, we can finally say that football is back. Starting Thursday, America will once again be wrapped up in our favorite sport, and it sure feels good. Week one is going to offer some serious drama, rivalry and excitement. Without further ado, let’s look at some of the matchups:

In the season opener, the past two Super Bowl winners matchup for what hopes to be a great start to the season. With two of the most high-powered offenses in the league, this game will be high scoring. Look for Packers tight end Jermichael Finley to be the x-factor in this game. After being hurt early in the season last year, Finley is motivated to be an integral part of what looks like a potential contender for back-to-back Super Bowl rings.

Don’t call them the “Dream Team” just yet, but the Eagles have players that look the part (on paper) of the top-tier rosters in the league. This game may be closer than a lot of people are thinking, and I fully expect the Rams’ Sam Bradford to be one of the elite QB’s in the league in a few years. I will give the Eagles the win, but not by a huge cushion.

What I am about to say has not been said in the past 12 years. Peyton Manning will not play in an NFL game. This is big news because (for my money) nobody is as important to their team in the NFL than Peyton Manning is to the Colts. Look for Kerry Collins to struggle against a much-improved Texans’ D. If the Colts’ receiving corps cannot make a few big plays, this one might get ugly.

You can say that the Redskins-Cowboys rivalry has produced more championships, or that the Bears-Packers rivalry is the oldest, but in this day in age, no rivalry is as fierce and physical as the Steelers and Ravens. I cannot remember the last time that these two teams played and it was not an incredible game. This time around should be no different. This is the year that Ravens’ quarterback Joe Flacco really needs to step his game up to the next level if this team wants to become champions. Look for Flacco to start his season off right in this game, although, it will not come easy.

Other Storylines to Watch For:

Previous Post:Watch Until The World Ends
Next Post:Can girls give HPV to guys?