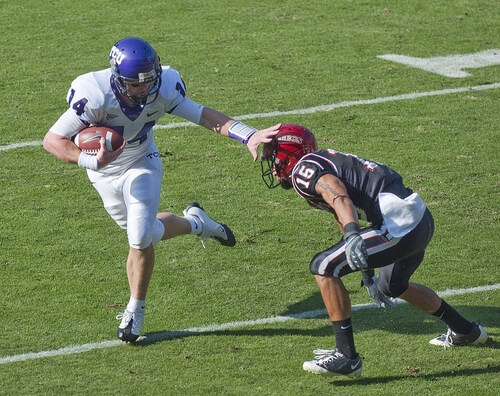 The second installment in a three-part series looking at rookie quarterbacks in the NFL and where they stand on their current teams. In part two we look at:

The “We’re Way in Over our Heads” Category

Newton’s position here is in no way a knock on him; after throwing for 400-plus yards in his first two starts, it’s clear he warranted the first overall pick. He’s been a bright spot for an 0-2 Panthers squad. Carolina has surrounded him with good receiving targets–Steve Smith, tight ends Greg Olson and Jeremy Shockey, and running back Jonathan Stewart. Based on his first two games, he should seem like a lock to be the first to make the playoffs, but he isn’t. Aside from the passing game and offensive line, the rest of Carolina’s team, to put it nicely, sucks.  Once upon a time, the Panthers had a ridiculous running game to complement Jake Delhomme’s passing, led by 1,000 yard rushers Stewart and DeAngelo Williams. This season, Williams and Stewart have combined for 74 yards, or three more than Cam Newton’s total. Their defense lost star linebacker Jon Beason and is in full-on rebuilding mode (seriously, can you name anyone on the Panthers’ defense not named Beason?) Newton can continue to put up monster numbers, but until the Panthers sort out their heap of other problems, he won’t sniff the postseason.

Dalton’s in the same boat as Newton; he’s played well off the bat, but his team doesn’t have the talent to support him. He’s thrown for 413 yards, three touchdowns, and no picks, and has a win as a starter under his belt, something Newton doesn’t. However, it doesn’t help that the Bengals play in the AFC North; Baltimore and Pittsburgh are clearly superior teams, even if they’ve been up and down in the first two games. Dalton has franchise quarterback written all over him, but until Cincinnati sorts out its other problems, he’ll likely be Carson Palmer 2.0–big numbers, but no postseason wins.