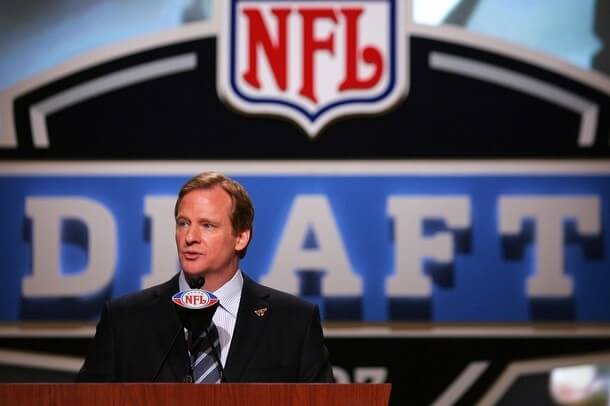 This should not come as a surprise as this pick has been locked in for months. Prospects like Luck do not come around every year – or every 10 years for that matter. With the departure of Peyton Manning, you can lock this pick up as a sure thing.

Also a lock, the Redskins will select RGIII to be their franchise QB for years to come. Say what you wish about what they gave up to get him (four picks to move up four spots), the ‘Skins saw their future in the young signal caller from Baylor. You can lock this one up as well.

The Vikings are in a full-on rebuilding mode and they have many needs. All signs say that they will start in the trenches and pick up the best lineman in this year’s class. Kalil has been nothing but impressive in all of his workouts and he is a safe pick for the Vikings to start their overhaul.

Although he lacks top-end speed, Blackmon will be a solid possession receiver in the NFL. The Browns are thin on skill position players and a guy like Blackmon will improve their offense dramatically, especially in the red zone. Blackmon is the best receiver in this year’s class.

With the fifth pick, the Bucs will take half of college football’s best cornerback duo last year – Morris Claiborne. It is pretty simple – the Bucs need a corner and Claiborne is the best in the draft. I wouldn’t go as far to say that this one is a lock, but Claiborne is by far the best fit for Tampa Bay.

St. Louis has a little wiggle room after all of those picks they got from Washington, and I think they will use the first one to get another weapon for Sam Bradford. With the departure of Brandon Lloyd, the Rams do not have many threats on the outside. If Blackmon is off the board, they will select the next-best receiver, Floyd. He is a great red-zone option and really just a solid all-around receiver.

The Jags are extremely thin on outside pass rushers and Coples can really get after the quarterback. Jacksonville is another team that is in rebuilding mode, but if they can sure up their defense in the next few years, maybe things will finally click for the franchise.

Although Tannehill is not a top-10 prosepect, the ‘Fins need a QB and he is the next best one available. After losing out on the Peyton Manning sweepstakes (and the Alex Smith sweepstakes), Miami will go back to the drawing board and start young. Tannehill may be a work in progress but he has the tools to be a productive NFL quarterback in the future.

Another team in desperate need of a pass rush, the Panthers should take Ingram, who I believe to be the best end in this years class. He can line up at end or linebacker and he simply gets after the quarterback. Many draft boards have Ingram being taken later but Carolina should jump at the chance to get him in the top 10.

The second Trojan to be taken in the top 10, Perry is an athletic freak. He will be an instant impact player in the NFL, and next to Marcell Dareus he could be part of one of the best D-lines in the league for years to come. Experts say Perry is a bit raw but that was said about Dwight Freeney. Look at him now.

Previous Post:Fun In The Sun: Rage At A Day Party
Next Post:May The Odds Be Ever In Your Favor: CM Reviews The Hunger Games