Before the season started, nobody predicted the San Francisco 49ers would play in the NFC Championship game with a rookie head coach and Alex Smith as the quarterback. Home teams went 4-0 in the wild-card round and overall they’re 7-0, aside from the Giants’ upset of the Packers at Lambeau Field. Now, only four teams remain and only two can advance.

The Ravens won a close contest last week against the Houston Texans. The Texans ran the ball well on them with running back Arian Foster totaling 132 yards. The difference in the game was the four turnovers that the Ravens caused, including three interceptions by rookie T.J. Yates.

This week, the Ravens face a much better quarterback when they match up against the Patriots. Brady and the Pats rolled right over the Denver Broncos last week as the three-time Super Bowl-winning quarterback completed 26 of 34 passes for 363 yards and six touchdowns. Yes, six touchdowns. Even more impressive was tight end Rob Gronkowski, who finished with more receptions, yards and touchdowns than the entire Broncos passing game (10-145-3).

This matchup between the Patriots and Ravens is a lot like the 49ers and Saints matchup from the divisional round. It features a high-scoring offense against a tough defense. The only difference is that the high-scoring offense is playing at home in this game. The Ravens will need to play much better defensively in this game than they did last week; Brady won’t make rookie mistakes. Also, the Ravens will have to account for everybody on the Patriots offense. If they shut down one guy, then another guy will find a way to get involved. This team features five Pro-Bowlers on offense.

Last week, the San Francisco 49ers kept pace with the New Orleans Saints and topped them, 36-32, in a thrilling finish. They weren’t able to stop the Saints through the air, as Drew Brees threw for 462 yards and four touchdowns. They were, however, able to contain their run game. The Saints averaged 132.9 yards per game during the regular season (sixth in the NFL), but were held to 37 yards.

Up next is the red-hot New York Giants who defeated the No. 1 seed Green Bay Packers. Eli Manning is in the zone right now; he’s thrown for three touchdowns in each of his playoff games this season. In addition, the defense has been just as impressive. They didn’t allow the Falcons offense to score any points in the wild-card round, and they only surrendered 20 points to the Packers, who averaged 35 points a game this season. 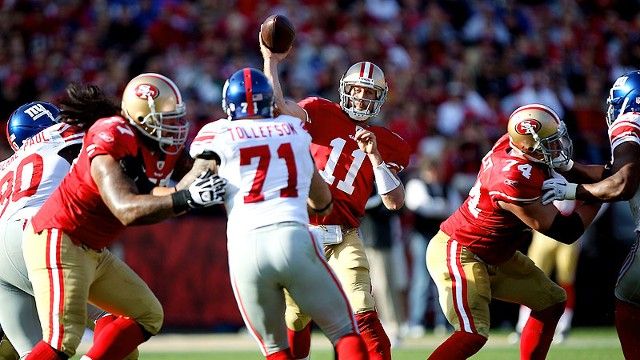 If the Giants are going to win, they will need to continue their balanced offensive attack. They struggled running the ball in the regular season, finishing with a league-worst 89.2 yards per game. In the playoffs, though, they have found some success, averaging 133.5 yards. San Francisco’s defense, however, will put the game in Manning’s hands.

Previous Post:Are You There College?
Next Post:Avoid The Freshman 15: Fight The Fat