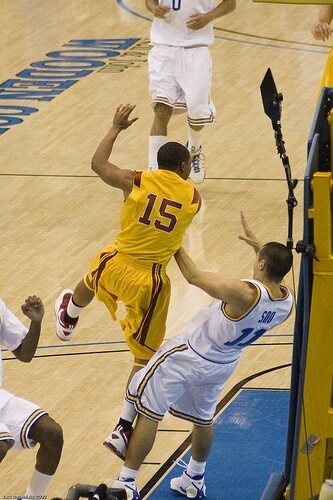 Flopping: the mere use of the word conjures images of Manu Ginobili falling to the ground when an opponent grazes his arm or Anderson Varejao’s famous fro flying across the court after the slightest of bumps.

The NBA is no stranger to flopping controversies.  In 2009, the volatile, yet entertaining, Rasheed Wallace went on this rant against Hedo Turkoglu after he felt a Turkoflop led to an unwarranted technical: “They’ve got to know that he’s a damn flopper.  That’s all Turkododo do.  Flopping shouldn’t get you nowhere.  He acts like I shot him.  That’s not basketball, man.”

Flopping is frowned upon by just about everybody except the player on the ground begging for a call.  This is why the NBA instituted an arc with a four-foot radius under the basket where a player could not be whistled for a charge.  This forces defenders to actually play defense rather than just standing and trying to draw a charge.

The NCAA may not have nearly as many notorious floppers as the NBA, but that didn’t stop the NCAA Rules Committee from officially adopting an charge arc with a 3-foot radius for both men and women’s basketball starting next season.

Instead of being rewarded for not playing defense, college kids now have to learn to keep their feet in front of their opponents slashing to the basket.  With the crutch of drawing a cheap charge eliminated, the players must improve their defense under the hoop or change their position to left bench.  Theoretically, this should increase the quality of defense in college basketball and subsequently in future NBA draft classes.

Few teams should have issues adjusting to this new rule with one prominent exception.

No team should have their haters making Facebook pages called “The Duke Blue Devils Are The Biggest Floppers Ever!” or have questionnaires created like Duke Flopper Camp.  Considering the school produced Greg Paulus, Steve Wojciechowski, and Shane Battier, they cannot really deny these accusations.  Flopping is practically in their DNA.

“Charges, when implemented as part of a game plan, can be an incredible equalizer against a more talented opponent,” said jockpost.com’s M.C. McMahon.  “But it’s a cheap parlor trick; it hides what is in plain sight. This will force teams to be more clever with their schemes.”

The Blue Devils and other teams that try to make up for their athletic deficiencies with their acting abilities will have to significantly alter their style of play based on this rule change.

So the next time one of the Plumlee twins tries to win an Oscar under the basket by looking like they just took a knockout punch from Mike Tyson, they will have to watch their feet.  If they find themselves in that arc, they better man up and play defense or feel Coack K’s wrath.

If you're interested in attending Duke University's Flopping Camp, check out The Dagger for more information.