April was established as National Poetry Month by the Academy of American Poets.

Writer, poet, activist and still stage-fright at times, Andrea Gibson offers her experiences and conversations with the world with striking words and emotional performances.

Beginning at a young age, Gibson doesn’t really recall a time she wasn’t writing. “I was very shy and quiet growing up, and I can’t say I got very loud about my beliefs and what I was feeling about the world until my junior year of college,” Gibson admits. “That was the time I came out queer.”
Gibson’s junior year marked the ending of her silence and the beginning of her pursuit toward becoming the activist she is today. “I think when I came out it sort of blew my whole world open in that I wasn’t able to stay silent anymore,” Gibson said. “It was the time that opened up my political eye and my political heart. I think that once your heart starts opening that way it becomes hard to talk about quietly.”

“She’s not asking what you’re going to tell your daughter. She’s asking what you’re going to teach your son.”
Following the Steubenville rape, Andrea’s mind and heart has been dedicated to the constant dialogue within her community and friends to write more about the social issue. “I’ve also been writing a lot about the idea of politeness and communities that are focused on social justice issues — how I think we sometimes need to be a little bit more rude or more willing to step on toes,” Gibson said. “I’ve been looking at my own writing and what I believe in and what I’ve been afraid to say.”
Andrea recently began “peeling open” everything she had been afraid to say and dared herself to discuss those very topics. “I have a friend Tara Harvey (a poet) who told me I needed to start writing the things I was terrified to write, and that changed my writing years ago,” And since then, Gibson has been taking this advice onto a whole new level. “I ask myself what now am I afraid to write, and am I willing to write it?”
As for college-goers interested in writing, the idea of becoming a touring artist is, well, probably the coolest gig ever. And for Gibson it became quite the journey. “The first thing I would say is to find a community in your town,” Gibson said. “I’ve travelled all over the country and beyond, but in the U.S. you can find a poetry slam and open-mic in just about every town. The communities can be really amazing and immediately welcoming.” 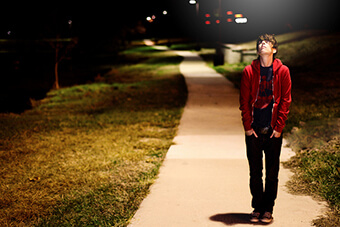 Many of Gibson’s poems seem to hit all areas of the emotional spectrum as each was written from her direct experience. “But things like war are sparked from my father being a Vietnam veteran or my friend coming back from Iraq, so the lens of a lot of my poems can start with a conversation with somebody,” Gibson noted. “But when I first started writing (trying to talk about a political issue I’m having no personal interaction with) I always got done with the poem feeling like it was a bit hollow, so I typically start any wide-themed poem with maybe a conversation I’m having with a friend or some personal experience I’m having.”
When it comes to improving the writing craft, Gibson advises aspiring poets and writers to pay close attention to each poem. “Just the active act of listening well improves your writing,” Gibson said. “If I’m really listening well to the poetry — even if it’s not poetry I particularly love — I am noticing what is really striking me and what isn’t.”
And when it comes to the habit itself, Gibson reminds those in the field to keep writing all of the time despite “being in the mood.”
“That was one thing I learned when I first started doing this,” Gibson said. “You can’t really wait to be struck by the mood of writing, because I think just as artists we can’t wait for it to strike us. What if it doesn’t come to us for another month?”
As often as Gibson performs on stage, her nervousness remains intact with each experience. “The mic is so scary for a lot of people and for me it was terrifying, and that is why I started memorizing my poems,” Gibson laughed. “The paper would actually start shaking louder than my voice was speaking, and so you couldn’t hear my voice over the paper shaking.” Even still, Gibson’s friends poke fun of her as she remains just as nervous as the first time she performed. “But I think there is a way to really focus that nervous energy into the emotion of the piece. Shift the energy into something that is congruent with what you’re speaking.”

Previous Post:When Your Friends Don’t Like Your Boyfriend
Next Post:That Itch You Can’t Scratch: Being Attracted to Someone Outside Your Relationship