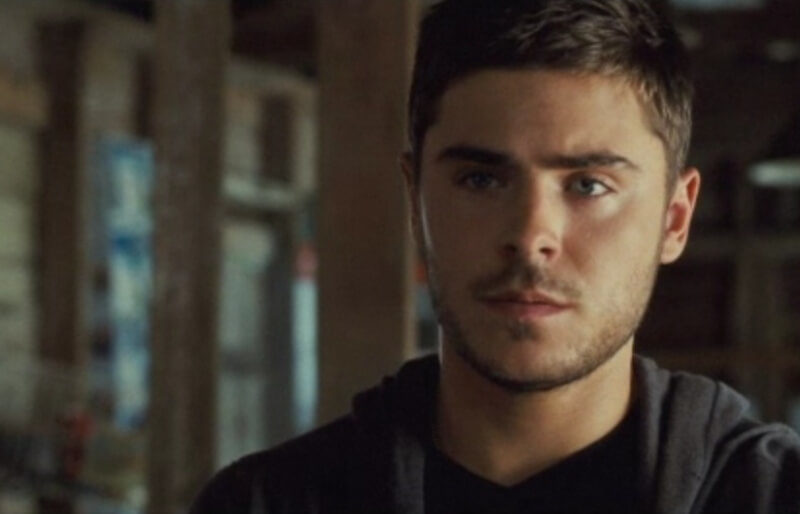 I can now officially die happy. That’s not to say I’m planning on biting the dust anytime soon, but my teenage dream has finally come true: I talked to Zac Efron. Of course, the conversation wasn’t exactly the way I’d always dreamt it (ie: figuring out our first date plans while he sings “Start of Something New” to me), but it was pretty amazing nonetheless. It took only a few moments for me to realize that, although Efron is an A-list celebrity, he had the ability to make me feel like I was a good friend rather than just a voice on the other end of the phone.

After watching him morph from adorable, gap-toothed Cameron on Summerland to crooning star athlete Troy Bolton in High School Musical, Efron has hung up his dancing shoes (temporarily, but we’ll get to that soon) in favor of some extra facial hair in The Lucky One.

In the movie adaption of Nicholas Sparks’ novel, Efron plays Logan Thibault, a young man who has just returned from his third tour of duty in Iraq. He attributes his survival to a photograph he found of a woman he doesn’t even know, so he sets out on a life-changing journey to find her.

Looking through the chronology of his television and film experience, it seems like Efron has shifted away from musicals and focused more on dramatic roles, as we see in Charlie St. Cloud and most recently The Lucky One. If he were offered a really amazing musical film opportunity, does he think that he would take it at this point?

“In a heartbeat,” he said. “I think there was a lot of other growing I had to do outside of the musical genre, and I wanted to work with great directors and have their guidance. So that was a long process that had to be done for me to have any sort of transition, and I loved every second of it. But if the right musical came along, I’d do it in a heartbeat. I really miss my roots.”

Charlie St. Cloud definitely helped Efron make the jump from a younger, predominantly female audience to a more mature one. What kind of viewers does he thinkThe Lucky One will help him reach?

“It’s definitely a grounded, intelligent movie,” said Efron. “Nick Sparks has that way about him that is very romantic, but [the movie] is also set in reality. These are characters that are very grounded, have lived full lives, and carried the weight of their past into their new relationships.  They’re just searching for love. Anybody that is a believer in fate and destiny is going to really like the movie.”

Commence swooning. Since there is a lot of conversation about the film that is focused on love being linked with destiny, does Efron believe in this connection as well?

“I’d like to think so. I only hope that when you’re feeling that feeling…” He paused for a second and chuckles. “I only hope that it’s fated, you know? Because it’s too good to be true.”

Sergeant Efron, At Your Service

When Efron decided to take on the role of Logan, he didn’t immediately dive into Sparks’ book.  Instead he “read the script first. But afterwards, I read the book, and it’s very nice. There are certain parts of it that are very in-depth looks into the character that you can utilize, and Nick is a brilliant writer in that regard. So it was fun to go back and look at certain sections of the book, and some of that proved to be very valuable.”

All this talk about “Nick” made me wonder if the writing superstar was on-set at all during the filming of The Lucky One.

“He was,” explained Efron. “He’s a very busy guy, but he came to visit a few times and was very supportive. His enthusiasm and excitement and his blessing were very big for us. He’s not the kind of author that just sits and lets his book get turned into a film. He loves to be a part of it. He cares about our side of it, and he’s very interested, which was very fun. A lot of good will.”

How did Efron find a way to mentally prepare for the role of a Marine Sergeant?

“Initially, I went to Camp Pendleton to meet with actual marines… either home from the war, and some of them were about to go back,” he said. “It was the most enlightening experience I had the entire time. Suddenly, it became real. In our generation, there’s guys my age and younger, and even my peers from high school that I grew up doing theater with, believe it or not, that are in the Marines and the Army.

“Yet somehow we’re still very removed from war. It’s something we see through newspapers or the Internet. On that day, it gained a lot more weight to me… the reality of what’s going on was realized for me. Other than that, I hung out with Marines as much as I could, and just observed how they were: their mannerisms, certain jargon, certain things that just make these guys men.” 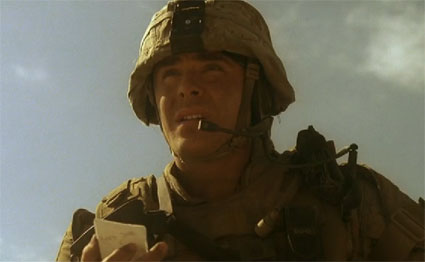 Not only did Efron’s visit give him a glimpse into the mindset of a Marine, but also a look into the physical appearance he would have to attain to more precisely portray Logan:

“At Camp Pendleton that first day, the Marines were physically imposing,” he said, conjuring up a very amusing image of Troy Bolton at boot camp. “I was slouching with long hair. They stood with their heads held high, shoulders back, ready to work. It was amazing. Their physical presence was something I saw, and I knew I was going to have to work very hard at. So I started a pretty demanding training routine with Navy seals in the gym every day, which was intense to say the least.

“In terms of diet,” he laughs, “I don’t know how many calories I ate over the course of the film. It was shocking. A lot of chicken and veggies. Yeah, it was intense.”

Does Efron see any similarities between himself and his character, Logan?

“Logan has this way about him that I try to incorporate into my real life, and that’s his sense of integrity. Although it’s the harder choice sometimes, he always tries to do the right thing. That’s the kind of person I strive to be.”

Recommence swooning. What about the differences between him and Logan?

“I think he’s much more of the strong, silent type. I’m a bit more easygoing. I try not to take myself too seriously.”

Somehow, we are already past the ten-minute mark, meaning our interview must come to a close. So far I've learned that Efron is charming and seriously committed to his craft.

But I haven't figured out where he's going yet. Now that he's shown he is more than capable of tackling comedies, musicals and romantic dramas, what kind of roles would he like to see for himself in the future?

“I think that there’s much more work I’d like to do in every genre at this point,” he said. “At the moment, I’d say anything I haven’t done before is very enticing. I mean, I would love to do another comedy or another musical. But something like action would be very fun. I really love the Bourne movies, and something along those lines would be very interesting. Who knows? I just want to do it all!”

And with that, I reluctantly say goodbye, but take solace in the fact that I am, in fact “the lucky one”, arguably the luckiest one in the whole world!

Go see Zac Efron follow his destiny in The Lucky One, in theaters April 20, 2012.