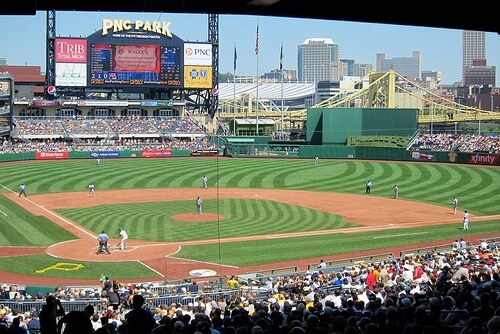 My Stadium Is Better Than Yours-PNC Park

Only three teams in Major League Ball recognize the real reason people go to baseball games: racing mascots.  The Milwaukee Brewers have their sausages and the Washington Nationals the Mt. Rushmore gang.  But only one team holds a mascot race that is completely one of a kind: the Great Pierogi Race of the Pittsburgh Pirates.

You never know who to root for: there’s the seemingly always grumpy Sauerkraut Saul, all-American Cheese Chester, femme fatale Jalapeno Hannah, and incredibly intelligent Oliver Onion.  I usually root for Saul in the hopes that his mood will eventually improve if he wins.  It never seems to work.

The only place in the world to watch racing perogies is baseball’s hidden gem, PNC Park.  Until their recent successes, most people did not connect the formerly hapless Pittsburgh Pirates with a beautiful ballpark fit for a World Series contender. Sometimes I take for granted how lucky I am to have PNC Park only a short ride to the North Side from home. Pirates still have unquestionably the most fan-friendly retro stadium in the major leagues.

The Pirates’ web site says it most succinctly: “PNC Park, which opened in spring 2001, is a classic-style ballpark, an intimate facility that embraces the progressiveness of Pittsburgh while saluting the spirit of early ballpark originals.”

Intimate is an apt description; PNC Park is the second smallest stadium in baseball, behind Boston’s Fenway Park, with a seating capacity of 38,496. A smaller seating capacity ensures there isn’t a bad seat in the house.

PNC Park is stationed across from Downtown at the end of the Roberto Clemente Bridge, named for one of the greatest Pittsburgh athletes of all time.  Giant statues of him, Willie Stargell, and Bill Mazeroski are placed around the stadium as a monument to their greatness.

Five World Series championship banners are painted on the top of the second deck as tributes to the franchise’s illustrious past.  The Pirate Parrot always roams the stands in all his green glory, whipping the fans into frenzy and taking pictures with young Buccos.

Then there’s the food: quintessentially Pittsburgh delicacies like Primanti’s sandwiches slathered with fries and coleslaw, Quaker Steak and Lube, and Pops’ Plaza that contains all of Stargell’s favorites including Chicken-on-the-Hill, Pop-A-Duke’s Gyros, and Pop’s Potato Patch.  Plus, how many MLB ballparks can say they have sushi on their menu?

When the Pirates win, they raise a flag dubbed the Jolly Roger and every Saturday victories are celebrated with Zambelli Fireworks, one of the largest providers of fireworks in the world. The park is always packed to see the Buccos light up the opposing pitcher and the night sky.

Bucco fever is spreading rapidly, and a visit to PNC Park will result in catching the thrill of the proud Pirate tradition. Only with a visit will you truly understand why my stadium is better than yours.

Previous Post:It’s in the Kiss
Next Post:Beyond the Bars