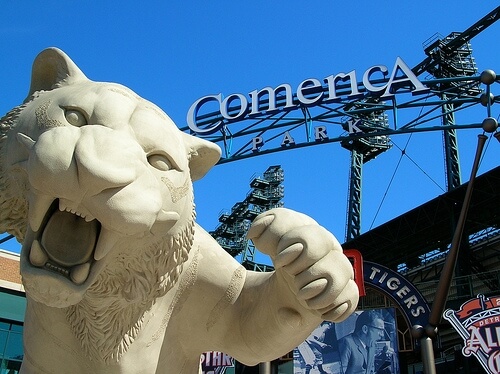 My Stadium Is Better Than Yours-Comerica Park

It’s not always easy being a Detroit sports fan, but our kickass facilities make it worthwhile. With baseball season in full swing, I’m referring to Comerica Park– the home of the Detroit Tigers. There are many reasons that make my stadium better yours and they start before you even mosey through the front gates.

Greeting Tigers’ fans on the street is super fan James Van Horn, whose chant “Eat ’em up Tigers, eat ’em up,” is belted through the yards before every home game.

He’s a favorite among fans for his energy. Many fans rock a t-shirt with his slogan and face on it. Before you walk in, two novelty size tigers perched above the entrance greet you.

Inside, there are 420 feet from home plate to dead center. Behind it, Comercia boasts a spacious view of the city. Ford Field, home of the Lions, peers over the left side of the stadium and statues of former Tiger greats line the center field backdrop.

Fans don’t have to worry about the inconveniences other stadiums try to pawn off on their fans. There is no obstructed vision (Fenway) for any seat in the entire park. The spacious inside eliminates any prospect of bad seating. There’s no worry of falling debris (Wrigley Field) because Comerica opened its doors in 2000 so it still has that new stadium smell. As far as ticket prices go, you won’t be forced to shell out half your paycheck (Yankee Stadium) because at Comerica you can get ticket as low as $5.

Even with minor league prices, Comerica has all the features of a major league park. The scoreboard in left field was the biggest in baseball when it opened and the fountain in the center field gushes water every time a Tiger belts a homerun. The fountain also dons General Motors, Chrysler and Ford signs in support of the local auto industry. The display is a vivid reminder of the working class that makes up the city.

If you’re a fan of baseball or just great architecture, you owe it to yourself to check out Comerica Park. Great deals, super fans and American League baseball. My stadium is better than yours.