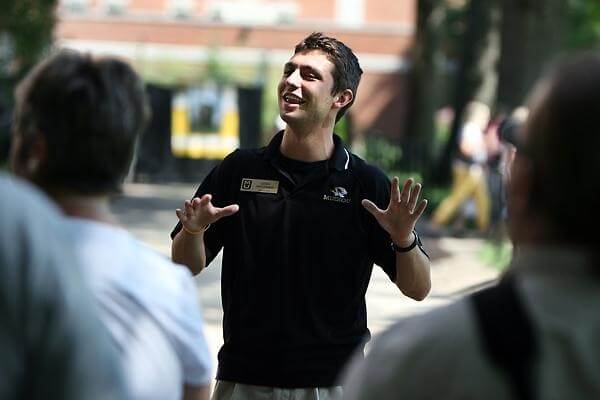 Don’t Be Fooled on Your First College Tour

The food is gourmet, flowers are in bloom and the dorms look like mini mansions. I'm not talking about Harvard, Yale or some fantasy school in the clouds. This is the rosy perception  you had of your university during your first college tour. The tour guides knew what they were doing and only showed you the best of the best, not that your freshman dorm would look more like a closet. Those of us who have been there, done that and have already made our mark on campus, know that those college tours can be quite deceiving. That saying, “all that glitters is not gold” stands true to taking a college tour and the reality is that many times what you see is not exactly what you get.

The goal of a campus tour is to impress you and make you want to come to the university. In fact, that is why many schools do not choose to do tours during unappealing times of the year. They always fail to mention that the campus is covered in snow most of the year. One thing that students look forward to seeing while touring a college is dorms, but beware that the rooms they show you do not define how all the rooms look at that school.

"When I went on tour at my old school they brought us to the apartment style new dorms. They briefly mentioned the other ones. Funny thing is that I got the worst dorms that debatably were used for jail cells years before," said Michigan State University senior Rachel Dickerman.

If you have time after the tour is over, walk around and see if you can view other dorm rooms at your university. Believe it or not, people are actually more then happy to show you what the school really looks like. If possible, wander into a hall and ask someone, if you can see how their room differs from the one you saw previously.

Kristen Greene, an Alumni at University at Albany went above and beyond when touring his campus. “I came into the school as a transfer, so I already understood the idea that you need to look past the tour to get the most out of it,” Greene said.

Talk to people on the campus once the tour is done and ask a few questions. There is nothing better then getting a first hand opinion on the school.

Greene took time to walk around with his friend who joined him on the tour to venture around the school and ask questions. “ I felt like asking questions to students and people passing by gave me a better understanding of the school because the tour was a bit biased,” he said.

Campus tours can be deceiving and believe it or not, current students on campus are more than happy to help you see the schools true colors. “ When doing the tour, I made sure to ask as many questions to my tour guide as possible, but once I realized I was getting textbook answers, I knew I had to ask around for real thoughts about the food and dorms” Greene said.

Lastly, the university isn’t going to serve you an unappealing lunch, they are going to make sure you leave talking about how great everything was. The best way to determine if that impression given at the tour was real is to venture back into the dining hall is the food still glistening and perfectly cooked, or is it dull and listless?

Stephanie Gallup, a Senior at the University at Albany, also took a tour of her campus before attending, and wasn’t as surprised when she chose to come to the university. “The food was about the same, both on the tour and now, but I wish I would have taken time to get to know the campus more before I chose this school."

Your personal goal should be to get the full view of what that school has to offer. Take time to find things out on your own, and make a point to speak with as many students as you can so that you can determine whether or not that school is a perfect fit.