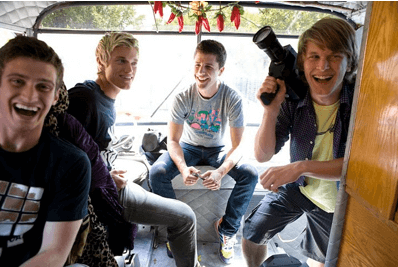 “We started four years ago with no money and a bus that broke down all the time,” Lingwood said. Though they had an offer on the table from MTV to be featured on a similar show in 2007, the boys wanted to tackle goal #53, having their own TV show, on their own terms. “It involved giving up creative control; we would have just been on the show. [Now,] we are the executive producers, we film it, we edit it; it is essentially our journal,” Penn said.  The guys cover the cost of their dreams coming true through their own funds, commercial sponsors and private donations.

And their list is not all fun. Some of it is downright scary for the guys. Penn and Lingwood, both listed goal #100, going to space, as the most frightening on the list, but #78, falling in love, was a close second.  Love is an adventure Lingwood takes seriously. “I will travel the world to find my dream girl,” he said. “She has to have a good sense of humor and be able to stand me.”  “She needs to be able to surprise me,” said Penn. “You think you got them figured out, but then they go one step deeper.”

Like Rachel McAdams, perhaps? Kissing her is #55 on the list for Penn, based on a bet he had with an ex. “She liked Ryan Gosling and I liked Rachel McAdams, and I thought ‘Why shouldn’t we be able to ask them out?’” he said.

Even when the going gets rough, “we really can’t complain,” Penn said. “People have been so good to us; we’ve been so lucky.”

The full list can be seen at TheBuriedLife.com, so try to catch them in your hometown on their Summer 2010 tour.

Previous Post:The Latest Chapter in Quidditch Through The Ages
Next Post:The Art of Day Drinking Games That Keep Your Buzz in the Sun