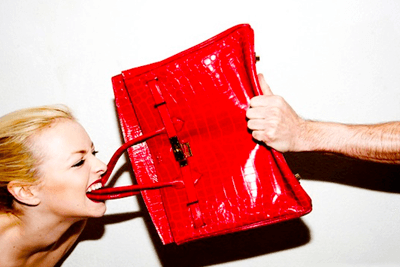 Kelsey ThomasJun 18, 2012
Home » Latest Posts » Mrs. Eastwood & Company: Francesca Eastwood talks life, love and Birkins
FacebookTweet
She’s a fashion junkie.  She’s the centerpiece of her photographer boyfriend Tyler Shields' photo shoots.  She’s an adventure-seeker and a homebody. Oh, and she’s also the daughter of American legend Clint Eastwood.  She is 19-year-old Francesca Eastwood, a self-proclaimed “normal college student,” that is stepping into a life that is anything but.

That’s because her family has decided to bare it all in a new reality show: “Mrs. Eastwood and Company,” which debuted May 20 on E! The show chronicles the lives of Dina Eastwood, wife of Clint Eastwood, the couple’s 15-year old daughter Morgan, Francesca (Clint’s daughter, stepchild to Dina, though she refers to her as “mom’ on the show), South African boyband Overtone (managed by Dina), and Lisa, the laugh-out-loud-worthy, live-in housekeeper.  Oh, and we can’t forget their eclectic collection of animals.

Sound like a lot to take in?  It is. But viewers will be delighted to find the family is a lot more down-to-earth than expected. “The stuff we do is so much different from other families on TV,” Eastwood explains. “The house gets a little chaotic sometimes. Literally, we’re constantly taking in new animals, but it’s amazing. I love it because there’s so much love in the house.”

Despite growing up so closely connected to one of Hollywood’s greatest legends, Eastwood said she has always preferred to lead a life outside of the spotlight. “I’m such a homebody,” she said. “I’m not constantly in the spotlight because I spend so much time at home in Carmel with my family.  When I’m in LA, I try to be low-key about where I go.” Enrolled as an undecided major at USC, she’s even the quiet girl in class. “I’m that lame college kid that doesn’t go to any parties,” Eastwood admits. “I was a cool kid in high school, but now that I’m in college I’ve kind of become that proud loser where I don’t go to parties and I’m kind of a loner… but I’m proud of it.”

Even as a child, her favorite memories were cultivated among family at her father’s secluded ranch.  “My dad has this amazing ranch, and my parents would always take me there,” Eastwood said. “It was so much fun when I was a little kid because it’s in the middle of nowhere. There are no phones. You don’t even watch TV when you’re there. My dad taught me how to drive a car up there in an open grass field when I was only nine years old.”

If you’re tuning into the show for a glimpse of daddy Eastwood, you may want to pick up a copy of “Dirty Harry” instead.  His appearances on the show are few and far between. “If you’re a Clint Eastwood fan, I think you’ll still like the show,” Eastwood said. “He’s obviously in our lives so he comes in and out of the show, but the show isn’t about what’s going on his life, it’s more about the women in his life.”

No Clint? No worries! There’s still plenty to see – like a group of five South Africans working hard to take over the music industry in America, and well… the world.  Or the ever-wise, adorable Asian housekeeper offering up advice on any and every bizarre situation that arises in the household. Or Eastwood ravaging a $100,000 Birkin bag for the sake of Shields’ photography portfolio.

Wait, what?  Yep, Eastwood, although reluctantly, agreed to destroy the 100k crocodile handbag (using a chainsaw to wreck it before sending it into flames) in one of Shields’ recent photo projects. As a result, she’s already getting a taste of that Hollywood spotlight –the couple has been on the receiving end of countless complaints and even death threats since the episode aired.  Shields is known for pushing the limit in his work. Setting a man on fire was okay, but apparently a Birkin bag is just crossing the line.

The romance between 29-year-old Shields and 19-year-old Eastwood is zealous and daring but doesn’t come without its fair share of tribulations. Shields’ uncanny ability to disconnect his photographer role from personal life often leaves Eastwood in tears, and her family has been unimpressed with him on more than one occasion. “Tyler and my stepmom have been through their differences,” Eastwood says. “There’s definitely a clash of personalities that happens.”

Though age difference seems to be an obvious target in the pitfalls of their relationship, Eastwood laughs that it hasn’t been a factor. “The clash isn’t necessarily due to age difference. The joke of my family is that my dad is in his 80s and my stepmom is in her 40s – I mean there’s a slight age difference there.”

Eastwood says she’s ready to put her famously private life out on the line alongside her family.  “I’d be lying if I said I didn’t have any concerns. Towards the end of the season it gets really, really personal, but I know what I’m getting myself into.”  Will you be there to watch it unfold?

Previous Post:Crazy About Acting: A Q&A With Melissa & Joey’s Rachel G. Fox
Next Post:Turn That Fling Into A Thing