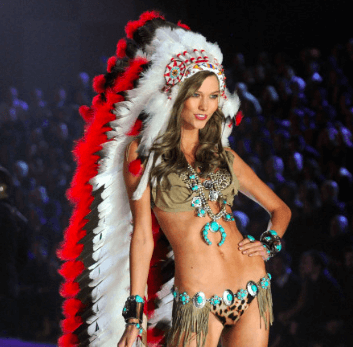 November marked national Native American Heritage Month, which celebrated the culture of the 566 recognized tribes. This year, a few high-profile unsuccessful attempts to get into the spirit of the month drew a lot of unwanted attention, according to CNN.

Most notably, the Karlie Kloss incident.

As part of the annual Victoria’s Secret Fashion Show, Kloss, a Victoria’s Secret angel, strutted down the runway in a Native American-inspired outfit, consisting of a long feathery headdress, turquoise jewelry, a fringe bikini and heels.

Throughout history, headdresses have been used as a sign of respect and power in the Native American community, often times worn by tribe chiefs or war heros. In some tribes, each feather was earned through a significant act. Some modern day tribes still use variations of the headdress, according to USA Today.

After causing backlash, on Nov. 8, the day after the show occurred, Victoria’s Secret made a public apology for the ensemble, promising they wouldn’t show it in the TV broadcast, which aired Dec. 4, according to CBS.

Kloss apologized via Twitter on Nov. 11 to anyone who was offended by what she wore, and stated she supported Victoria’s Secrets’ decision to not show the outfit on TV.

This mishap came at a sensitive time for the Native American community, since No Doubt’s controversial video for Looking Hot had just recently premiered. The video featured fire dancing, tepees and Gwen Stefani on horseback with a feather stuck in her braided hair. The band also made a public apology and pulled the video, according to CNN.

Lana Del Rey also used a headdress in her music video for Ride, which recently premiered as well, according to The Fashion Spot.

The appropriation of Native American culture into the mainstream has also been an issue in apparel manufacturing as well. Last year, Urban Outfitters pulled its “Navajo” line, consisting of printed underwear and a flask among others, after receiving a lot of complaints, according to USA Today.

So why does it matter?

Some Native Americans feel these incidents of cultural misappropriation are degrading, because Native American culture still is alive today and shouldn’t be represented by relics of the past, according to CNN.

According to CNN, adorning clothing with tribal prints is insulting because the prints represent something more than just a fashion trend. Those prints’ significance comes from the rituals and traditions they represent. When consumers wear clothing or accessories with those prints, it’s comparable to wearing the Star of David or a cross as a fashion statement.

With the holiday season approaching, some Native Americans are encouraging consumers to not support companies mass-producing symbols from their culture, and instead to look for clothing and accessories made straight from Native Americans themselves.

Shoppers can look to website such as shop.beyondbuckskin.com and nativethreads.com to get presents made by Native American artists and designers. Beyond Buckskin was started by Turtle Mountain Chippewa Jessica Metcalfe, according to CNN.

Previous Post:Future of Dream Act Not Over
Next Post:Exploring Our Rights: Reflections on Human Rights Day