Millennial Culture: The Good, the Bad and the Ugly 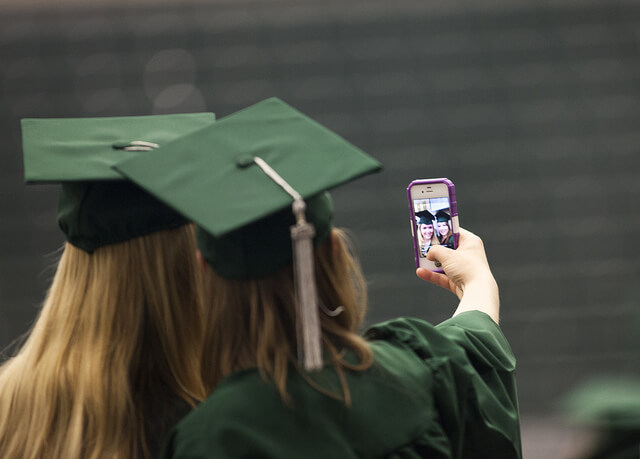 Baby boomers and Generation Xers alike commonly harp on about the apathy of the Millennial generation — that we’re lazy, spoiled, unmotivated, or too caught up in our smartphones to make any meaningful contributions to society. But if they were to step back and look at some actual data*, those hecklers would find that they couldn’t be more wrong. The Millennials have made great strides of progress across the board, both socially and economically. But that doesn’t mean we’re perfect; there’s still plenty of room for improvement.
*Surveys conducted by Pew Research, Social & Demographic Trends

(via giphy.com)
• Nowadays, young women in the workforce make more money relative to men their age than their grandmothers and mothers did. In 2012, women aged 25 to 34 earned 93 percent of the average hourly wage of men the same age. Although the number should be 100 percent, it’s far better than the measly 55 percent of the 1970s.
• A record number of young adults are completing high school and college. In 2012, for the first time in history, an entire third of the country’s 25- to 29-year-olds have a bachelor’s degree. One other staggering statistic: a whole 90 percent of young adults within the same age range have at least a high school education.
• The population of college students is diversifying as well: 44 percent of college-aged students are non-white, up from 17 percent in 1971.
• When asked, 92 percent of American gay, bisexual and transgender adults agree that society has become more accepting of the LGBT community as a whole in the past decade. In the same vein, the percentage of the American population that supports same-sex marriage has risen around 20 percent since 2003.
• Over an eighth of Millennials say they now have enough money to lead the lives they choose or at least expect to be able to in the future. “I definitely expect myself to be able to live the life I want to in the future,” Penn State alumna Maddy Pryor said. “I worked hard in my college years to get a full-time, well-paying job that I enjoy just 3 months after graduation. I don’t think everyone in our generation has the money they need, though, and I think the biggest factor there is student loans.”
The Bad

(via giphy.com)
• “In certain issues such as marriage equality, today’s young citizens are the most liberal on record. But that may be the rare exception,” said Dr. Eric Plutzer, political science professor and director of the Penn State Survey Research Center. “On other issues such as abortion, gun control, they are no different from young voters 10, 20, or 30 years ago.”
• Surprisingly, this includes our stance on the environment. Despite the pressing issues of global warming and pollution, Plutzer said Millennials are less likely to identify as environmentalists than any generation prior.
• In the U.S., 36 percent of young adults aged 18 to 31 still live at home (the highest percentage in four decades). That’s a lot of musty basements.
• The skyrocketing price of college tuition would make you think graduates are earning more than the generations before them. Unfortunately that’s not the case: Millennials make an overall median salary of $35,000, which is barely $5,000 more than that of the Silent Generation in the 60s. In other words, we’re inheriting more debt but aren’t earning a proportional salary to cover our losses.
• 37 percent of graduates ages 25 to 32 wished they had gotten more experience while still in college. University of Maryland alumnus Ofo Ezeugwu, who started his own business while still in college, also regrets not being more involved while still enrolled. “I wish I had gotten involved earlier with organizations at the university. I would have started excelling earlier, meeting more people in the beginning, and of course, meeting more women,” he quipped.
The Ugly

(via giphy.com)
• Two-thirds of recent grads owe student loans, with an average debt of $27,000. That’s twice the average debt of graduates 20 years ago. “I have plenty of colleagues — and even myself — that are so worried about not being able to pay them off. My loans are significantly more than $27,000 and I know it will take me a very long time to pay them off, and that scares me,” Pryor said.
• According to AmericanProgress.org, 54 percent of those murdered with firearms in 2010 were under the age of 30. An American under 25 dies of a gunshot wound approximately every 70 minutes.
• Although a higher percentage of Millennials are earning degrees, unemployment among graduates is far more likely than any generation before. Today’s college graduates also spend more time looking for jobs — an average of 27 weeks, which is a long time to eat only ramen, rice and beans.
Progress is an infinite path, but I’d like to think society is headed in the right direction. Adolescents build upon the achievements of their predecessors, and our parents and grandparents have set solid foundations upon which we’ll mount our own accomplishments. With the collective focus of an entire generation, there’s still a good chance we won’t completely obliterate ourselves.
(main image via flickr.com)

Previous Post:University of Florida
Next Post:Love Life in College: How Well Can You Juggle?