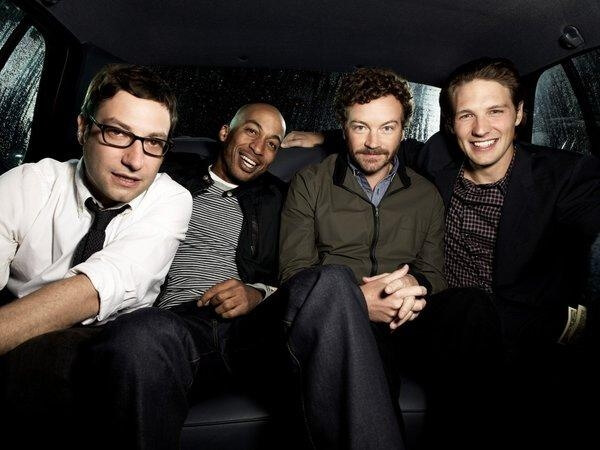 Men At Work: Adam Busch and Michael Cassidy Talk About Their Hit Show

Jay SchwartzJul 12, 2012
Home » Latest Posts » Men At Work: Adam Busch and Michael Cassidy Talk About Their Hit Show
FacebookTweet
Tonight, TBS will air the season one finale of its new hit show, Men At Work. The Sex and the City for this generation of men, the show has delivered what TBS promised it would: a great comedy about guys being guys, and helping a friend get over a break-up in the best way they know how–by getting him laid. But the show is much more than just that. Two Men at Work stars chatted with College Magazine and told us all about what makes this show special.
Adam Busch, who plays Neal on the show, is more than just the guy who killed Tara on Buffy the Vampire Slayer… which is kind of hard to be. After being hated by the majority of my high school friends, he’s now graduated from lesbian killer to best-friend wingman on TBS’s Men At Work. The show explores main character Milo’s struggle with re-entering the dating world with the help of his friends.

Somehow, I think this is a more relatable character than Buffy’s Warren for Busch. “I’d say that about 25 percent of me is 100 percent of Neal,” he says, referring to his character on the TBS hit. “I totally understand where he comes from. Sometimes he can be sort of like the voice of reason. He’s definitely better at giving advice than taking it though.”

On the show, Neal is the only member of the gang with a steady girlfriend and his buddies make fun of him sometimes. So how does this translate from the real life experiences of an actor? Busch relates, “I’ve definitely been in long term relationships—I’m really good at monogamy. But you know my guy friends don’t tease me I guess. At least not for being in a happy relationship.”

So why is it that guys tease each other so much, which is what the show truly revolves around. “Well teasing is how guys express love. It’s like when they talk about sports. When they talk about the Yankees, they’re actually talking about their feelings. When you’re talking smack about the Jets, maybe its not the Jets you’re angry at.” Sounds like a metaphor to me. And metaphors are important.

Michael Cassidy, who plays Tyler, says the show is relatable because it portrays realistic situations…well…realistically. When Milo moves in with Tyler, for example, the two have to deal with being roommates and encounter scenarios all too familiar to anyone who’s had to share their living space. Things get ugly when Milo uses Tyler’s special toilet, and Cassidy, who’s lived with roommates most of his adult life, can relate.

“One guy I lived with, I basically just found him on Craigslist,” Cassidy recalls, “and he was a super weirdo. He wanted me to keep all of my stuff to like one corner of the fridge. Also, I think I gave him like a one month notice before I moved out, like he asked, and at one point, I came back and he had packed up all of my stuff and left it outside. Obviously he also stole my deposit. It was just bad.”

Women have Sex and the City and Girls. Guys… well we can have shows like Men at Work. “The show is super relatable," Busch says. "Like the other day we had an episode about texting and how to text a girl. Milo wants to text the word “cant” but chooses the wrong vowel and things just go wrong.”

So does the show accurately capture male friendships? “Well, me and my friends have Sunday brunch every week and we’re always talking about the episodes,” Busch told me, “I never get passed telling the first story of the episode without one of them being like ‘Oh my God that has happened to me!’”

You can catch Men At Work Thursdays on TBS, and be sure to watch the double-episode season finale tonight at 10:00EST.