This one will be simple. In the world of sports movies, baseball dominates the landscape. But because of that, some movies and characters become just another name or face. Such is the case with Crash Davis. Bull Durham is one of the best baseball movies of all time, and Davis is the best character. But did Bull Durham define my childhood? No, Mighty Ducks did. Gordon Bombay is pulling off his best Ali Farokhmanesh impression and knocking off the top seed in the second round. WINNER: Gordon Bombay by a quack.
-Danny Golden

Dicky has more to thank for The Fighter being a superior movie to The Replacements for his first-round win than he does to thank his overbearing mother and off the chain, bipolar, fight club member sisters for his drug addiciton. Dicky does not enjoy this same advantage this round when he faces one of the greatest basketball movies of all time. In addition to leading his team to a state championship, Norman Dale gave us a lesson we will never forget: no matter where or who you play, they shoot on the same size hoop as you do. Even if Dale lowered the hoop to six feet, I still don’t see Dicky being motivated enough to leave the crack house and attempt to finally reach his potential. Dale in blowout.
-Joe Cipollone 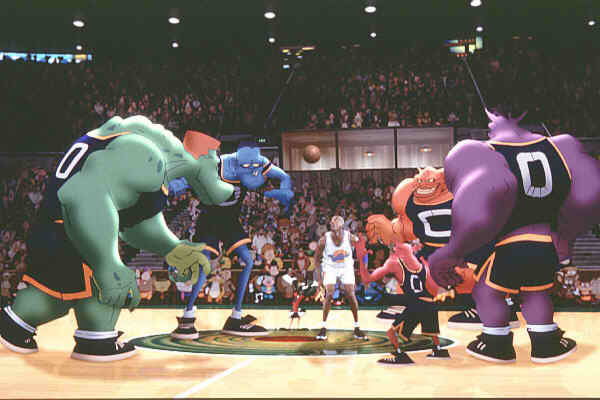 What we have here is basketball royalty versus comedic royalty. One of Adam Sandler’s best (If not his No. 1 seed) characters against Jordan in a memorable role starring alongside the Toon Squad. The fact that Jordan stars alongslide the famed Looney Toon characters is where Gilmore starts to take control of this matchup. Gilmore is the star and he carries the movie. Granted, he gets some help from his supporting cast, but he is the one on the course smashing golf balls and sinking putts with a hockey stick no less. Jordan does play against a talented group, the likes of which he never faced in the NBA, but again, it’s a team effort to pull off the comeback win. In the end, does he make the buzzer-beating slam with every MonStar on his back and that’s impressive. We’ve also seen it many times before, and his flair for the dramatic is a bit old at this point in time. Happy Gilmore, amateur hockey player turned pro golfer, banging in a zany putt to win the gold jacket and save his grandma’s house? That is the definition of clutch. WIN: Happy Gilmore
-Taylor Schwink

Not everyone can say they had a lifelong effect on multiple young men, putting them on the right track to a college education and all around better life just because of basketball. Cut Coach Ken Carter can. And when you compare him to Brandon Lang, a slick high-roller who used to play the game, well, there is no comparison. Coach Carter wins; no contest. Coach Carter never flipped a coin on the outcome of his player’s lives. That right there says it all. WIN: Coach Carter
-Ashley Melfi