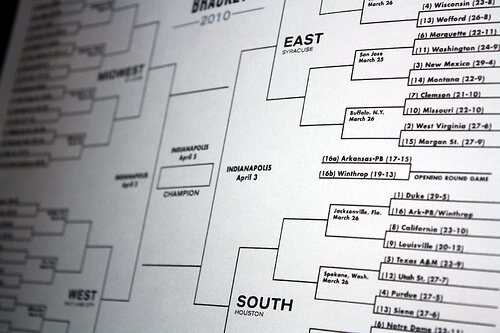 March Madness Around The Nation

For a select number of students that attend one of the 68 schools chosen to participate in the NCAA Tournament, they aren’t just aware of the phenomenon that takes place in March, they live the madness that comes with the package.

“I’ve been following March Madness for years,” Dan Dadino said. Dadino, a freshman biomedical engineering major at Vanderbilt, embraces it. “Now that I have a true affiliation to a specific team and a newfound hatred for [that] team’s rivals, I can’t get enough of the tournament.”

Zac Stewart, a freshman civil engineering major attending Michigan State, expressed a similar, more confident, opinion. “The campus is really coming alive as everyone is talking about March Madness and how State will do,” he said. “A lot of people on campus believe we can bring home the national championship.”

Some universities are used to being in this situation this month. The Syracuses, the Kansases, the Kentuckys, the Dukes and the North Carolinas experience the feeling of being in the March spotlight practically every year.

But while the tournament is an annual event for some teams, it does not come as easily for smaller and lesser-known schools. For those teams, being mentioned in the same sentence as “March Madness” garners more attention to the university more than anything else could possibly achieve.

“Athletics attracts fans, students, faculty and attention,” said Dave Servodidio, a junior entrepreneurship, economics and music business triple major at Belmont University. “Since I’ve been here, I’ve seen each freshman class change in appearance and interests, and I feel strongly that it has a lot to do with our team’s success.”

Tim Moulton, a freshman business and engineering major at Lehigh, offered his view on this opportunity. “Everyone is excited that we have a chance to prove our worth in front of the nation,” he said. “The tournament is a magical thing and we’re all happy to be a part of it.”

In general, the tournament is a big event for any college community rooting for their team’s success. Students usually watch the early-round games in their dorm rooms with friends or at home during spring break. As a team advances on in the tournament, some expect those games to be shown on a big-screen TV in the respective basketball arenas.

“There’s nothing like celebrating a healthy win or a giant upset with all your fellow fans,” Dadino said.

Some students are lucky enough to have their school play locally in the first round of the tournament. “We play Thursday in Pittsburgh, so I’m driving up with a group of friends to see it,” freshman criminology major Graham McFarland of West Virginia said.

At some of the bigger schools, like Ohio State, Michigan and Florida, football trumps basketball in popularity. But come March, basketball rules over all other sports, as exemplified in Syracuse, NY.

“Syracuse has always been known as a college basketball powerhouse, and the university and its students take pride in that,” Kevin Agresto said. Agresto, a freshman sport management major at Syracuse, added, “The whole city gets into it and Syracuse basketball is the main attraction on campus and for residents of the city.”

Previous Post:Neon + Neutrals
Next Post:Must-See This Weekend: The Hunger Games