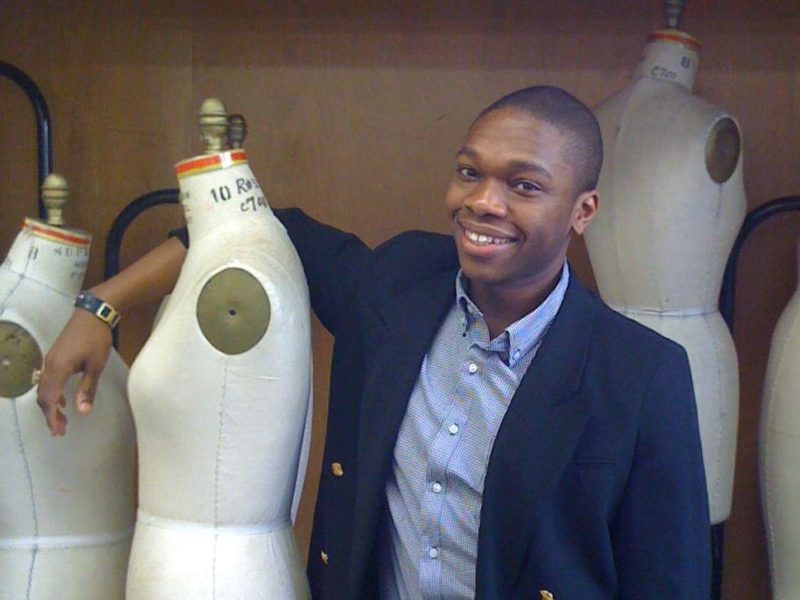 Wendy Ekua QuansahFeb 1, 2012
Home » Latest Posts » Making the Shoe FIT
FacebookTweet
Growing up everyone has an idol, and it typically isn’t your parents. Filthy rich artists like Jay-Z or basketball legend Michael Jordan are praised to which die-heart fans hang at least one autographed photo on their bedroom wall.
Similarly for Kenneth Udemezue, 22, his role model is fashion designer Donna Karan of DKNY. “I believe in her company and her collection,” he said. “I agree with everything she stands for.”
Udemezue, a senior majoring in fashion design for women at the Fashion Institute of Technology, is the recipient of the 2011 Estee Lauder Lab series skincare for men redesign competition. He received a $3,000 cash prize, full year skin care supply and people around the world are wearing his designs, but even still, he’s had his fair share of disappointments.

His journey to become a successful fashion designer began in the eighth grade after altering his school uniform. As a result of positive feedback from classmates, he bought a sewing machine for ten dollars.
“I loved the idea of making something unique and not fitting in with everyone else,” Udemezue said. “I loved construction, not even designing.”
He began thrift shopping with intentions of altering every piece. At Boces, a vocational high school in his hometown Long Island, Udemezue finally obtained the opportunity to study fashion in an academic setting. Soon after, he had his sights on FIT. But, Udemezue was denied admission his freshman year and instead attended community college. He said, “I felt like I was going to die.”
Today, he attributes the original decision to an underdeveloped portfolio. He spent 10 months editing his work before reapplying and eventually being accepted. He was even granted an interview the second time around. “They told me on the spot I was getting in as long as my grades were strong,” he added.
At that moment, Udemezue felt that passion, perseverance and determination granted him enrollment.
His next big challenge is a senior collection project that partners with The Cotton Inc. Specializing in evening wear, Udemezue will have to manipulate cotton to produce one wearable evening garment made of 60 percent cotton in order to be considered. The winner will receive a $10,000 cash prize.
“Cotton is not ideal, usually it’s silk. Also, it’s going to be costly,” he said. Udemezue will use part of his $3,000 Estee Lauder competition cash prize to surprise the judges.
As graduation approaches, he wants to be more assertive as he enters the real world. “I see myself taking over DKNY one day,” he said.
FacebookTweet
Life

Previous Post:Winning Love With A Rose Ceremony
Next Post:Love Sucks: 10 Movies to Blame