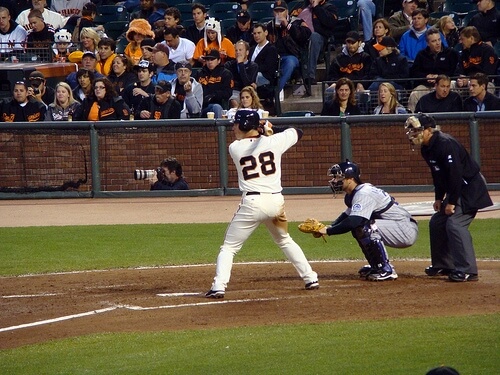 The clip was shown over and over again on ESPN.  It hurt just looking at it and it probably made your stomach turn a little. I am talking about when Scott Cousins bulldozed Buster Posey.  Posey’s ankle turns in a way that an ankle never should and then he writhes on the ground in terrible pain.  Clearly something should be done to protect catchers from an incident like this ever happening again.

That something should be a rule that players cannot run into fielders, including catchers, and those players also cannot block the player from reaching the base.  There have just been way too may notable collisions at home plate that have ruined careers and season.  Besides Posey, you can look at the 1970 All-Star game when Pete Rose nailed Ray Fosse, dislocating his shoulder.  Fosse was never the same again.

As Buster Posey’s agent Jeff Berry said, as the rules stand, they leave the catcher way too “vulnerable.”  Berry continued, “If you go helmet to helmet in the NFL, it’s a $100,000 fine, but in baseball, you have a situation in which runners are [slamming into] fielders. It’s brutal. It’s borderline shocking.”

Berry is right, but failed to recognize catchers in baseball aren’t wearing solid protective gear.  Yes, catchers do wear protective gear, but the gear truly is only effective for blocking balls and foul tips.  There is so much fear over head-on collisions in today’s sporting world, it’s surprising that it hasn’t entered into baseball.

A catcher can get blindsided by a runner while trying to catch the ball.  It comes down to, whether or not the runner has enough power to hit the catcher with the force required to lose the ball.  It’s an unfair advantage for the runner.  Running from third base, the Rock might be the best pinch runner in baseball.  Nowhere else on the field do players try to knock a ball out of a fielder’s mitt.  Remember when Alex Rodriguez knocked the ball out of the glove of Jason Varitek’s glove in the ALCS?  It was a dumb-looking play, and is essentially what is happening at home plate.

The NCAA, Little League, and high school baseball effectively protect catchers and other players by outlawing interference.  The MLB should be able to adopt a rule like theirs.  Unfortunately, though, there is almost no shot this will happen.  Running into the catcher is a classic aspect of Major League Baseball.  As Tim Kurkjian said on ESPN, “Baseball is a tough game, played by tough men.”  It looks like brain cells will continue to be destroyed, ankles will continue to be gruesomely rolled, and shoulders will be dislocated.