You are here: Home / Life / Love is a Battlefield

What makes a romantic comedy so addicting and disgustingly good? Having just sat through roughly 16 hours of airplane movies, I think I’ve got a decent idea: explosive reunions and bold declarations of love and affection.  Basically the part that comes after “the big fight.”

We may think that we want a sparkly, perfect relationship where both parties agree on everything all the time. But the truth is, humans adore drama, we crave conflict, and more than anything, we love a Hollywood ending – even in our own lives.

So many couples try to bury their problems, naively believing that a potential issue might just go away. But here’s my advice this week – fight. Just do it. Get your hands dirty, go all in, and see if your relationship comes out on top.

Before you drag out the boxing gloves, you need to understand some ground rules. First off, don’t get carried away. It’s very important to remember that if you are going to be open and “fight” with your partner, you should be aiming for a stronger relationship, not a black eye and a WWF championship belt. Ladies, this is not the time to say you hate his best friend and guys, it’s not OK to mention that she’s put on a little weight. If you’re really bothered by something it should be strong enough to stand on its own without attacking your partner’s other aspects.

Second, you should remember why you’re fighting – you want things to get better. It’s not a debate. Your goal here is not to verbally humiliate and shame your partner. Resist the urge to bring up that time your boyfriend called his ex-girlfriend three years ago and don’t hold a grudge about that football game your girlfriend taped over so she could watch Desperate Housewives. Let. It. Go. If either of you feels attacked communication will become incredibly strained.

Next, try your absolute hardest to keep calm. Maintain your cool as much as possible. My favorite fights have taken place face-to-face in bed with the lights off – somehow, a more relaxed and intimate environment lends itself quite nicely to facilitating candid conversation. And better yet, if any controversial perspective sends you or your partner into conniption fits, you’ll both be much less inclined to flip out in a calm environment. 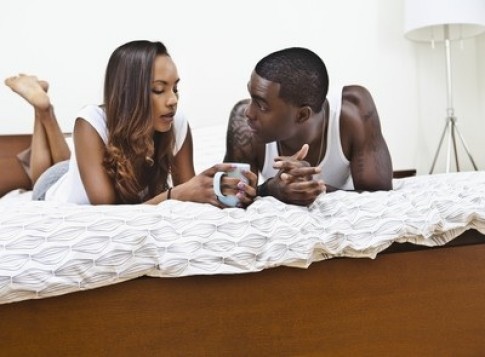 Most importantly: BETTER OUT THAN IN! This is not just a slogan for vomiting sorority girls. If an issue has been weighing on your mind, and you’re confused about explaining yourself, don’t hold it in. Fear of potentially ending the relationship or causing rifts might be plaguing your conscience, but unless you’re confessing to something really awful most issues can and should be easily rectified through the power of honest conversation. And if your relationship can’t handle a little turbulence, maybe its time to look elsewhere.

And of course… like the movie-script ending we all pray for, the best discussions end with two things. The first? Closure. Knowing that you’ve spoken your heart, your mind, and you two have gained a sense of understanding even if the problem isn’t going to change overnight. The second? Make-up sex. So speak your mind, get it all off your chest, then grab your significant other and lock the bedroom door. It’s a downhill battle from there.