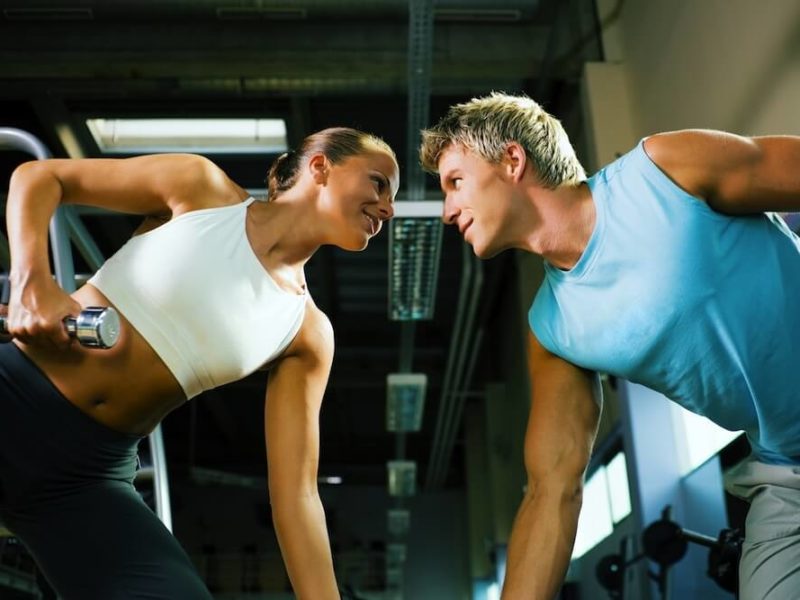 As unappealing as it sounds to sweat and pant through a workout with your significant other at your side, it certainly has its sexy advantages. Joseph Gonzalez and Cassandra Carbajal, a couple at Nova Southeastern University, have been together for over a year and work out  five or six times a week together (sometimes twice a day!). Does it gross them out? Hell no; it has exactly the opposite effect.

“I have been doing Crossfit for almost two years now, and I love it,” says Gonzalez. “I used to beg Cass to try it countless times, but she wasn't convinced.” One day, Gonzalez took Carbajal to a free class to experience it for herself (after all, seeing is believing). “When I saw all the competition, effort, skill, and determination of the athletes, I immediately loved it,” says Carbajal. “While it wasn’t that exciting at first (since we went at different times,) I got the hang out of it quickly. After I felt more confident, I began working out with Joe. I wanted him to see how strong I was; I would even compete with him during the workouts.”

A little friendly competition among lovers never hurt anyone. Impressing your partner ain’t bad, either.

Perhaps couples like Gonzalez and Carbajal are a rarity. If one of you is super active and athletic, chances are the other is a bit of a couch potato. If you both fill the athlete bill, pat your sexy selves on the back; half the battle is already won. If you are a sofa spud, it ‘s time to get up – no, not to the kitchen – and get going!

“I don't see anything wrong with one person being more active than the other,” says Gonzalez. “But I also don’t see the problem with bettering the health of your partner.”

“If I were involved with someone lazy, I think I’d eventually get lazy too,” says Carbajal. “Keeping active is important to me, so I look for active partners.”

So never fear, sofa spuds; venturing into the unknown land of fitness for a lover is intimidating (even to us jocks) but easier than it sounds. My advice? Start off nice and easy; you don’t want to exhaust yourself by trying to match your athletic counterpart move for move right away.

“Definitely try doing something in a group. Crossfit, spinning, kick boxing, and Zumba classes are all awesome. Anything workout where you’re together with a group of people will be more comfortable, since there will most likely be other beginners,” Carbajal says.

Don’t back down when you see those ripped people in class, either; even hardcore Crossfitters like Gonzalez and Carbajal are only human. “We balance healthy eating habits with a steady workout routine; but every now and then I cheat on weekends with something sweet to keep myself sane,” Gonzales says.

“Part of the fun from working out with Joe comes from him acting like my trainer,” Carbajal says. “Don’t be intimidated if your partner works out more than you, or if you don’t know what you’re doing in a class right away.”

She smiles. “A steamy shower together after a grueling workout is worth the effort of a workout.” Carbajal may be onto something: work and you shall be rewarded. Keep it competitive in class, and relaxed later. Pushing each other physically during a workout is great; however, when the workout is over, it’s important to return to snuggle mode.

“It never hurt anyone to become fit; it’s not just improving your health, but you get to look better naked, too,” says Gonzalez with a laugh. Well put, my friend, well put.

Great relationships are based on many things, one of which is compromise. So if your next partner is a gym addict, tag along one day to see what the fuss is all about. Who knows, you might end up becoming a bigger addict than your partner.

Previous Post:Making Money Over the Summer: As Easy as 1, 2, 3
Next Post:Spain tramples Italy in Euro 2012 Finals