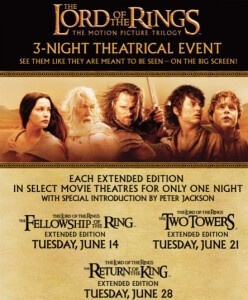 Party like it’s the early 2000s. The Lord of the Rings trilogy has made a (temporary) return to theaters, much to the delight of their Middle-Earth hungry fans. In select local venues, the extended versions of the films are enjoying one-day re-releases throughout the month of June.

The Fellowship of the Ring ran last Tuesday, June 14, with the Two Towers appearing tomorrow, June 21, and the Return of the King on the 28th. In addition the hours of additional footage added to the already lengthy films, moviegoers will get a personal introduction by Peter Jackson himself on the big screen.

Amid all the enthusiasm surrounding this plan, you can’t help but think that Jackson himself has a bit of an agenda. With The Hobbit not due out until 2012, he wouldn’t want to leave his fans hanging on for another year without an excuse to visit the theaters. And given the popularity of the LOTR extended versions, which till now have been relegated to the in-house, day-long, movie marathon staple, this is the perfect marketing strategy.

But does is really matter that this may be the case? Few films have generated as much enthusiasm as the trilogy in recent memory, and even given the preponderance of new films this summer, Jackson is probably right to assume that no one will say no at the chance to relive some of their most epic experiences at the movies. So yes, Jackson may be working his advertising powers for The Hobbit. But he knows his fans, and they’ll never tire of the originals. Get more on the re-releases from The Escapist Magazine.