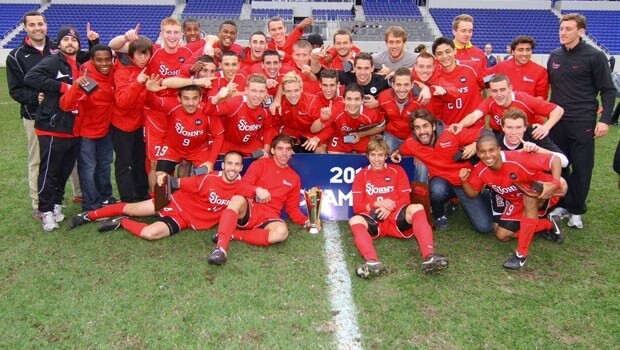 Looking at the End of the College Soccer Season

The College Cup is right around the corner and, as of right, the NCAA soccer Division 1 national picture is typical but also very strange.  The expected – North Carolina, Maryland, Connecticut, Akron, and Indiana occupy the top ten of the NSCAA rankings.  The surprise – the No. 1 team in the nation is the only undefeated team in the country, New Mexico.

There are undoubtedly naysayers around the country that believe the New Mexico’s spot atop the polls is a fluke.  To that, the Lobos can point their September 16th 1-1 tie with reigning national champion Akron.  Following the tie, New Mexico head coach Jeremy Fishbein said, “Our program is about being the best program in the country, and we didn’t come out here to tie the game.”  Since then, the Lobos have done just that and have reeled off 11 straight wins.

My (and almost everyone’s) pre-season favorite to take the 2011 national title, Louisville, was predictably batted around by their ridiculously difficult early season schedule.  The Cardinals, though, recently snuck back into the NSCAA Top 25 (No. 14) and appear to be geared for another run at the College Cup.  Of their five losses this year, three have come at the hands of current top 10 teams, one to a top-25 team (St. John’s), and one to potential top 25 team (Notre Dame).  Even with their losses, the Cardinals still must be considered the favorites.

Louisville is one of the five Big East teams in the November 8 NSCAA Top 25, the highest number of any conference.  Connecticut is leader of the pack, tied for No. 4 in the country, but the Huskies don’t even lead their division in the Big East, a testament to the strength of the conference this year.  UConn was ranked No. 1 in the country for a while after the Huskies went undefeated through their first fifteen games.  Connecticut, Louisville, Villanova, and St. John’s were the last four standing in the Big East Tournament.

It looked like the Huskies recaptured that early season momentum and made it to the conference championship, but were upset 1-0 by the Red Storm yesterday. St. John’s locked up a College Cup bid that will most likely leave another Big East team out of the national championship race.

The other conference with a lot of representation in the rankings is the ACC.  North Carolina (No. 3), Virginia, Boston College (No. 13), and Duke (No. 24) made up the final four teams in the conference tournament.

Yesterday the Tar Heels captured the tournament crown, beating Boston College 3-1. The win for UNC will most likely ensure them a No. 1 seed in the College Cup.

Amongst these ACCers, one can’t forget about the sliding Maryland Terrapins (No. 4) who lost in the first round of the tournament to Boston College last Tuesday. The loss dashed the Terps’ hopes of securing a No. 1 seed in the College Cup.

Both North Carolina and Maryland were ranked No. 1 during the season.

Update on Players to Watch

Javier Mena has truly been a maestro for Dickinson this year and has emerged as one of the top players in the Centennial Conference.  Mena leads the Red Devils in goals, assists, and points and is also second in the Conference in points with 23 points on 7 goals and 9 assists.

Ryan Finley isn’t having his incredible 2010 season but is still playing well.  He is currently eighth in the Big East in points with 16 points and fifth in goals with seven.

Will Walsh is also having a solid 2011.  He sits at fifth in the Big East in saves and save percentage and eight in shutouts.

Kyle Ciliento unfortunately tore his ACL and has not had a chance to break the all-time Grand Canyon record for goals.  He only has to tally five more goals to break the record.