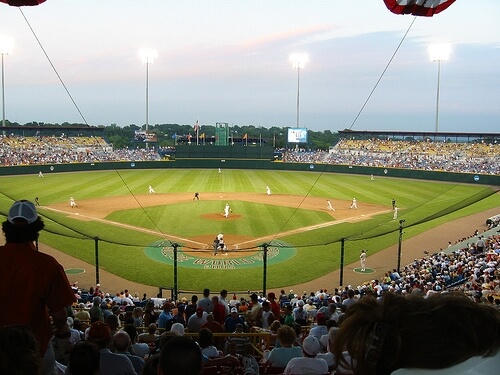 Amidst the Dirk vs. The Heatles battle characterizing the NBA Finals and a biting scandal in the Stanley Cup championship series between the Vancouver Canucks and the Boston Bruins, the Division I College Baseball playoffs has reached its super regional stage with only 16 teams remaining.  For a quick breakdown of the teams still alive and vying for a College World Series title, step up to the plate:

Virginia came into the tournament with the number one overall ranking and has proven they deserve it by beating East Carolina, St. John’s, and Navy in the Charlottesville Regional.  Pitcher Danny Hultzen was just selected second overall by the Seattle Mariners in Monday’s MLB draft, so he is sure to be hungry to end his college career with a bang.  The Cavaliers will be facing a UC Irvine squad that is within .05 of them in batting average (.298 versus UVA’s .303) and also went undefeated in its regional in Los Angeles.

Neither of these teams swept the competition in their regional series, but the Golden Bears of California lead Dallas Baptist in almost every statistical category, with a team batting average of .316, slugging percentage of .495, and 1.07 homeruns a game against the Patriot’s .284, .398, and .049 in those same categories.  California also ousted eighth overall seed Rice from the tournament and will try to continue their impressive run.

The fifth overall seeded Seminoles have yet to lose in this tournament and do not plan to let the Aggies slow their roll.  They are led by senior pitcher Sean Gilmartin – a recent MLB draft pick by the Seattle Mariners – who has tallied 116 strikeouts and 11 wins.  His team will be facing A&M’s Ross Stripling whose 12 wins is tied for second most in Division I.  This series might come down to a duel of star pitchers.

The reigning national champions South Carolina Gamecocks may have beaten Stetson, N.C. State, and Georgia Southern in its regional, but Connecticut boasts two 2011 first round draft picks: outfielder George Springer to the Houston Astros and righty pitcher Matt Barnes to the Boston Red Sox.  Springer will have to put that pitching arm to good use against the USC’s Christian Walker, who is leading his team in batting average, runs, RBIs, and home runs.

Both teams are coming into their super regional undefeated and looking to change that for their opponent.  Senior catcher Mike Zunino and his remarkable 63 runs and 15 homeruns lead Florida.  The Gators will have to try to contain Mississippi State’s Jarrod Park, who is fourth in Division I in on-base percentage at .530

The Longhorns will be playing this series in their own backyard, not to mention the fact that they were seeded seventh overall.  The Sun Devils will be hitting against junior pitcher and Milwaukee Brewers draftee Taylor Jungmann.  They will need some major production from sophomore pitcher Brady Rodgers, sophomore infielder Joey DeMichele, and junior infielder Zack MacPhee.

The Commodores must be ecstatic to have newly-drafted Oakland A and junior pitcher Sonny Gray on their squad.  They will be up against a veteran Oregon State pitching staff consisting of juniors Sam Gaviglio and Josh Osich as well as senior James Nygren.  Sixth overall Vanderbilt will be looking to send the Beavers back to their dams.

The Tar Heels will come out in full force to support their team. Minnesota Twins draftee and junior shortstop Levi Michael will try to lead second overall-seeded UNC against the Cardinal and Los Angeles Dodger draftee/ junior pitcher Chris Reed.  In a tournament where three of the top eight teams are from the ACC, UNC will be trying to establish a seat at the top of their conference.

Previous Post:School’s Not Out for Summer
Next Post:5 Fun Gym Classes for Summer