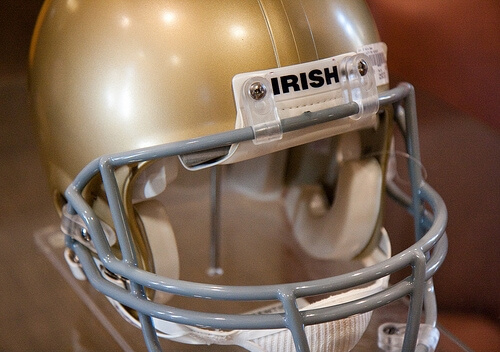 Sure, college football started Thursday and will continue today. But those games don’t count. Well, of course they count, but they don’t count. Considering the Kentucky-Western Kentucky atrocity a major season opener would be a travesty. That game and the rest of the lot were boring, ugly and noncompetitive. I’d rather watch paint dry or grass grow than view Louisville-Murray State.

But Saturday will be different. It’ll have compelling matchups – Boise State and Georgia, LSU and Oregon – and will finally bring an end, if in spirit if not actuality, to the offseason from Hell.

College football has had it rough of late.

The cheating. The firings. The accusations. The tree poisoning. The phantom bagmen. The strippers. The Yahoo! Sports reports.

If you’re like me and love the game, the time between the national title game on Jan. 10 and Saturday has been long and full of embarrassment. It hasn’t been fun.

But that’s all over now. In the spirit of celebration, here are six lead pipe, stone cold opening weekend picks (and remember kiddies, gambling is against the law). Home teams in caps.

Wildcats quarterback Dan Persa, if healthy, is going to be a Heisman contender. Northwestern has the offensive firepower to make a run at the Big Ten Whatever Division They Are title.

Here’s your easy money for the weekend. The fighting RedHawks are the defending MAC champions and have OK talent for a MAC school. Missouri will win, but that 21-point spread seems a bit large, especially since the Tigers are breaking in a new quarterback.

Return to glory! The Irish roll all over the highly overrated Bulls. By the way, who decided to name USF teams the Bulls? That should’ve been changed before they went FBS back in the day.

Houston Nutt is already trying to figure out his exit strategy to take the North Carolina job, or at least milk faint interest from UNC into a contract extension.

I’m laying the points mainly because I’m rather confident any game played on The Longhorn Network starts with UT getting spotted ten points.

Those guys with the blue grass (not to be confused with bluegrass, because clearly that stuff did nothing for UK) always win these games.